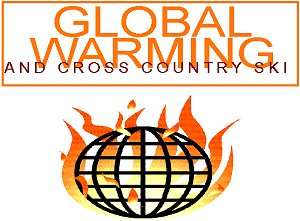 When you live in a remote and wild place like the Adirondack Mountains in northern New York, you can fool yourself into thinking that you left behind some of the environmental problems that people deal with in other places. Then one day it hit me like a 2 X 4 across my head that it didn’t make any difference how well we were living our lives in the Adirondacks, if people around the world continued to burn fossil fuel at the current rate, everything was going to change. We were going to wake up in 10, 20, or 30 years and the world would be completely different and winter as we know it would no longer exist. Even within the last 12 to 15 years since I wrote The End of Nature, these potential eventualities have become more apparent and obvious. At the time global warming was a controversial hypothesis. But in the decade since it is no longer controversial as scientists now agree that it is, in fact, “the pressing danger” facing the planet.

The world is heating up. There is a scientific consensus that the average global temperature has increased about one degree Fahrenheit in the last century with an additional five-degree increase still to come. The result will be that today’s average 60-degree temperature will go up to 65 degrees by the end of the century. What does that mean? Very simply, with one degree rise in temperature all the frozen areas of the world will begin to melt and at the current rate of melt the snows of Kilimanjaro, Africa’s highest peak, will be the rocks of Kilimanjaro by 2015. Every sub-arctic glacial system is in rapid retreat. By 2030 the glaciers will all be gone including those in Glacier National Park. There are also very good measurements of the ice thickness in the Arctic because nuclear submarines have been running underneath the North Pole for 50 years. Declassified measurements report the ice is forty percent thinner than it was 40 years ago.

Winter is already almost three weeks shorter across most of the northern states; at 45 degrees north latitude winter now comes about nine days later and leaves about eight days earlier based on frost dates than it did just 30 ago. It’s conceivable that there will be a winter not too long in the future when water will no longer reliably freeze on ponds and streams and mud season will last for three or four months in the middle of winter followed by something resembling summer. The five warmest years on record have been in the past six years and the year 2001, globally, was the second warmest year ever. Weather always goes in cycles, but it is clear now that there is a trend overlaying these cycles. Things are changing very quickly and unless we are able to put a brake on the ways in which energy is used and unless we are able to make the transition to renewable forms of energy, it is going to get worse as the century wears on.

There are plenty of things we could be doing about global warming. Unfortunately we are not doing much in this country for what appear to be political reasons, but with any luck that will change. Here’s a hopeful statistic: The biggest growth in energy production in the last year wasn’t from coal, gas, oil, or nuclear. It was in wind power, which increased about 31% last year. The Danes are generating 15% of their electricity from the wind; the Irish are going to put in a huge bevy of windmills along the North Sea; and in parts of Germany 60 to 70% of all electricity comes from the wind. This is great news, for these are not just warm and fuzzy technologies for hippies to use in their off-the-grid geodesic domes any more. They are real things that make real sense in real economies. If we’d face up to it in this country, we could do an awful lot about it. The Department of Energy estimates that if windmills were installed in just the good wind sites across the Dakotas and Texas, we could generate more electricity than the U.S. uses in a day. There’s no reason this couldn’t be done, but we’re all so used to relying on coal, gas, and oil. Sure it’s going to take some money to make the transition, but the environmental costs are simply too high. Sadly, that message hasn’t gotten through to Washington.

Every generation should be aware that they could be living during one of the turning points – one of those “special” times – in history. It is extremely difficult for us to grasp this concept, however, as we are part of the normal flow of time and this deludes us into missing the moments when things really do change. We may be living at one of those moments. In the past 10-15 years we’ve reached the point where human beings are numerous enough that our combined emissions can change the temperature of the planet and we’ve gone from being one creature among many, part of the world, to being a dominant force.

This should set off an alarm for us that it’s time to re-evaluate who we are, how we are living, and how big we are going to get. Global warming is no longer simply an interesting question in the scientific community. The only interesting questions now are how much or what will it mean.

As far as “the end of nature” goes, we must look at the question of who human beings are in relation to the natural world, because we clearly are part of nature and we’ve done a disservice to forget that and live as if we’re not part of it. At the same time we’re different too, consciousness makes us different. For example, if you go for a walk in the woods and see a pile of deer droppings and walk another 100 yards to find a pile of McDonald’s sacks and beer bottles, you have a different reaction to those two forms of litter. The reason you have a different reaction is that the human being didn’t have to leave the garbage – didn’t need to be changing the temperature of the planet. We’re different because we have the choice not to do this if we don’t want to. And at this point that’s what we’re called to do – to reign ourselves in.

In some places it’s easy to get people to listen about the perils of global warming. In Bangladesh, for example, where the country is only a couple meters above sea level it’s easy to get people’s attention when you’re talking about this kind of threat. In the United States that’s not always the case, for it seems abstract and far off and we’re rich enough to deal with it. But if there’s any group who should be willing to pay attention it’s those who love winter and cross country skiing.

Scientists have developed good computer models that can create long-range forecasts for particular areas. Regional forecasts for the Northeast, for example, indicate that at some point during this century both cross-country skiing and snowmobiling may be non-existent because there won’t be reliable snow. There has been a steady decline in ski sales that correlates to what’s happened to winter across Europe and North America. Unless there is significant, strong action in a relatively short term, one of the things that will happen is that the sport of cross country skiing won’t survive this century.

The only good news is that this does not have to happen. There is definitely going to
be a certain amount of global warming. So much carbon dioxide has been pumped into the atmosphere through the combustion of fossil fuels that we have locked ourselves into a certain increase in temperature of another degree or two. But those forecasts could potentially be avoided if dramatic actions are taken soon. What will it take? It must start with a series of political shifts that allow us to quickly transform the basis of our economy from reliance on coal, gas, and oil to reliance on renewable energy. Five or 10 years ago when scientists talked about wind and solar power they did so with their fingers crossed. These technologies weren’t quite there yet, but they are now.

A shift to smaller and hybrid cars is going to require serious political action, not just doing things on your own.
We need to talk to as many people as we can and on any level, from mayor to congressman to the president. Everyone needs to make it an issue of saving as much as we can of the way of life and the places we treasure. If we take effective action, perhaps the young kids skiing today will still be skiing when they are middle aged. This needs to be our goal, because if we don’t take dramatic action it’s a pretty good bet that our children, not our grandchildren, our children will not be able to enjoy the world and the sport of cross country skiing as we enjoyed it.

Bill McKibben, an environmentalist and environmental writer has been working on the issue of climate change for many, many years. His 1989 book “The End of Nature” introduced the concept to a general audience. It has been translated into 20 languages and he has traveled around the world speaking on this issue.