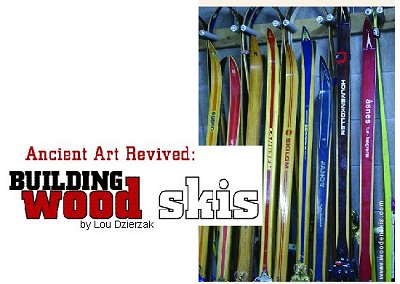 In an age of computer-aided design, state-of-the-art engineering and technologically advanced plastics, Mark Hansen teaches students to build wooden cross country skis by hand. It’s not a common art. And few people would think about making their own skis when an off-the-shelf model can be on the snow in minutes. But this art sees a resurrection in Hansen’s ski building classes, taught at the North House Folk School in Grand Marais, Minnesota, where students turn rough hewn boards into a pair of intricately decorated, usable skis.

“The first step is a walk in the forest,” Hansen explained how he locates the right wood for ski building. “I look for a tree that is clear of all branches and as straight as a gun barrel,” he continued. “I’ll cut the tree down at knee height and spit the trunk in half.” For his students spending a Friday night and two full weekend days, Hansen hand-picks raw materials. “I’m looking for birch, spruce, pine or ash that’s roughly 8 -10 inches in diameter,” Hansen described the ideal wood. “I like to take the ski material from the north side of the tree where the growth rings are tighter.”

Before the class begins, Hansen cuts and shapes the logs into boards approximating the shape of a ski. “I’ll make a top cut that is thinner at the tip and heel and thicker at the waist,” said Hansen. But good skis require more than the right shape. “I orient the wood so the ski tip is toward the trunk,” said Hansen. “The grain runs from the stump to the top of the tree. Because the grain lays in one direction, it will catch the snow like waxless skis.”
Despite the performance characteristics of cross country skis available on the market today, Hansen has been practicing his craft of building wooden skis for over a decade. Learning his art under Marvin Salo, the son of a Sami school master ski maker, Hansen sees his ski building as a continuation of an ancient art. “I think the oldest pair of wooden skis, found in a bog in Finland, is 6,000 years old,” stated Hansen. “I’ve looked at a lot of different traditions in ski building. They all have a little different type of ski for different applications and snow conditions,” continued Hansen. “When skis were used for basic transportation, each family would have a quiver of skis for different conditions. Skis used to be made in a day: Start in the morning. Ski on them in the afternoon.”

According to Hansen, students enrolled in his North House Folk School class are avid skiers who want to learn more about ski construction. “They’ve tried different kinds of skis from bushwhacking to track and skate skis and they want to try and make a pair,” stated Hansen. But it takes more than just desire to make a pair of skis. In addition to your weight, Hansen continued, “There are a lot of things to consider. You have to think about the ski in a different manner. You have to ask yourself: what are the qualities I want to put into the ski?”

After determining the way students plan to use their skis, Hansen begins with finishing the bottom of the ski first. “We cut a cove or slot in the bottom of the ski,” he explained. “While modern skis use a semi-circular style, older skis used square cove, multiple square coves and round coves. The builder’s choice depended on the conditions and traditions of the farms where the skis were built.”

Since many of the students enrolled in the North House Folk School class planned to use their skis for off-trail use, Hansen recommended a square cove. “It’s more efficient on a wider ski because it will give more lateral support. They don’t slide out from under you like a pair of garbage can covers,” he said. With modern power tools, cutting the coves is faster and easier than with the original hand tools. Once the cove is completed, a side cut is made.

The next step is finding the balance point for each ski. “The balance point is established by placing it on a sharp edge and finding the center point. That’s where the bindings go,” Hansen said. Students can install modern bindings or use historically accurate alternatives. Hansen shows students how to use leather bindings similar to the reindeer skin straps used in Norway 500 years ago. Shoots from young birch trees were also used. “They stripped tree sprouts three or four feet long, peeled them down and wove them into bindings formed to go over toe and heel,” Hansen explained. “Covered in pine tar, the straps worked well.”

Before sanding, finishing and sealing the skis, Hansen and the students use traditional methods to add camber to the skis. “We talk about camber a lot and how to apply it for individual preferences. A 90-pound person needs different camber than some 200 pounds,” Hansen said. Originally, skis were bent over an open fire or soaked with boiling water. Wrapping the wood in a wool blanket, ski makers poured boiling water over the wood, pressing it into a form. “At the North House Folk School we adjust the ski camber in the tip, heel and waist with heat, moisture and pressure. The wood ski sits in the wet wool blanket; then it’s placed in a form, and we blow warm air over it all night long. By Saturday morning, the shape is set,” described Hansen.

Hansen offers a more technical explanation for the camber process, “We heat up the lignin in the wood. The lignin is the natural glue that holds the cellulose together. The heat liquefies the lignin and that makes the cellulose slip. Once it cools, it sets,” he explained. “You can heat and bend the skis hundreds of times. It’s as if it’s still living.”

Finishing the ski tops with decorative etchings, students add individual art to their creations. Hansen believed the practice of carving geometric patterns on the top of the skis began in Norway 200 years ago. “Since skis were the main form of winter transportation from farm to farm and village to village, the geometric patterns occupied their thoughts on a 20-mile journey,” he said. 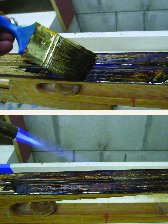 In the building process, the last step is sealing the wood. Keeping with traditional methods, Hansen uses a boiled mixture of turpentine and pine tar to protect the unfinished wood. “It’s applied hot so it soaks into the wood,” he explained. “It works well because I do a lot of etching in the top of the ski, and it lets the pattern out.”
For Hansen, the best part of building wooden skis is putting them to use. Wearing his mukluks on wide skis, he uses his wood skis in all conditions. “When it gets really cold, like 40 or 50 below, wood skis slide a lot nicer on snow,” Hansen stated. “At that temperature plastic gets more abrasive, but the wood skis seem to get faster and faster.”
No experience is necessary to build your own skis with Hansen. With three days spent under his tutelage, you can take a pair of custom-built, artfully carved wooden skis home to hang over the fireplace. Or better yet, pull them out to use in the first snow. “You learn quite a bit how a ski works when you build one yourself,” as Hansen pointed out. “A philosopher friend told me that the unexamined ski is not worth making.”

Using a cold kick wax (Special Green or Polar), apply a thin layer to the base for the whole length of the ski. Using a cork, rub the base until the friction blends and smoothes the wax in. Repeat the wax application until the base has a shiny, glass-like surface. You may have to apply the cold kick wax two times.

Hard Wax: Crayon a light layer of the wax of the day over the base glide wax. Using a cork, rub the wax briskly until it gets smooth and blends into the base. Repeat the application of wax and corking 2 or 3 times. The wax of the day can be chosen by looking at a chart provided by the wax manufacturer. Kick wax is typically only applied below the foot on the base of the ski from the heel to about 10 inches past the toe of the boot.

Klister: Apply the klister to the kick zone using short, chevron style streaks of wax. Smooth into the base with your thumb or a klister spreader. If necessary, you can warm the klister on the base with a propane torch or a hot air gun. But be careful! Apply klister in a thin layer! Multiple layers may be necessary for icy conditions.

Waxing information courtesy of Greg Fangel who owns at least 50 pairs of wooden skis and has three decades of wooden ski experience. He is the creator of www.woodenskis.com where you can find additional information about preparing wooden ski bases for pine tart treatment.