The Barnebirkie a Children’s Event Past & Present 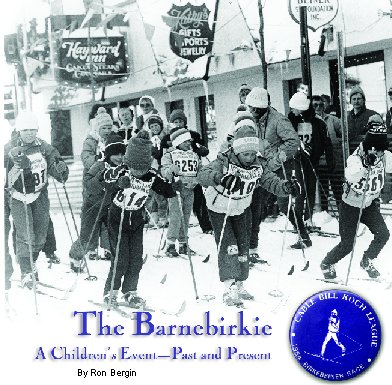 If you were asked to name the largest cross country ski events in the United States, chances are you’d start with the American Birkebeiner and continue with a handful of other major marathon ski races. You might be surprised to learn, however, that one of America’s largest Nordic ski events doesn’t involve a horde of adrenalin-charged, fitness fanatics, but over 1,000 kids, age three to 13.

Intended in part to snag kids into skiing, and ultimately to provide a feeder system of future Birkebeiner skiers, the Barnebirkie is not a race in the conventional sense. Although a clock runs, times are not recorded, making it strictly a fun event. From the smallest of munchkins shuffling along Hayward’s Main Street to budding speedsters skating with abandon, the event attracts an average of 1,000 plus kids with peak participation exceeding 1,800 in the late 1990s. 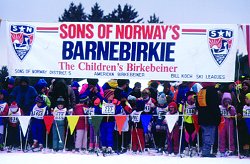 As the Sons of Norway amped up event promotion, more local ski clubs, school groups and organizations from as far away as the Twin Cities began showing up, and numbers jumped up considerably.

The local Bill Koch club ran an event for several years in the early 1980s. Held at Telemark Resort during the week leading up to the Birkie, the untimed event was called the Cable Bill Koch Birkie Race. Participants received a purple ribbon and celebrated with hot chocolate and cookies at the end. “It was a fun-event,” said Kathy Bergin one of the event’s organizers. “We emphasized the ‘fun’ aspect and that ‘everyone was a winner.’” Comparable to contemporary distances, course lengths were not far, starting in front of the former Telemark Coliseum sports complex at the site of the then Birkie finish line, running behind the lodge, around a skating pond and out onto a couple of the resort’s shorter ski trails.

Jim Crandall, another of the event’s organizers recalled, “In those days winters were cold, not like today. Our kids all wore snow pants and stocking caps. A big group from Stillwater (Minn.) came one year in their sleek racing suits, and here we were looking like country bumpkins.”

The Cable Bill Koch Birkie Race had grown to around 200 kids when the recently formed American Birkebeiner Ski Foundation approached the club about joining the Birkie week festivities. “We had a pretty big club,” said Crandall, “but putting on an event like this is a pretty big job.” When the foundation offered to take over the race, running it in Hayward, the club agreed.

The transition from the Cable Bill Koch Birkie Race to the actual Barnebirkie also involved the Bill Koch League organization in neighboring Hayward, where a strong, active Koch League at the time had grown to around 300 skiers. With Sue and Tim Gardner, physical education teachers in Hayward, as co-chiefs of the event during its first years, the Hayward Koch League played a significant role in continuing the Cable club’s tradition.

During its first couple of years, the event started and finished on the Hayward Golf Course on the city’s edge. Registration was originally at the courthouse, then the elementary school and finally the National Guard Armory. As the number of participants quickly grew, it became necessary to move the finish to Main Street.

As more help was needed, the event’s principal sponsor, the Sons of Norway, a fraternal organization whose mission is to promote Norwegian heritage, stepped in to assist. As the Sons of Norway amped up event promotion, more local ski clubs, school groups and organizations from as far away as the Twin Cities began showing up, and numbers jumped up considerably. “At one point,” stated Sue Gardner, “we had to bus kids from downtown to the start. There wasn’t even room for people to stand.”

Over the years, significant sponsors such as Ocean Spray provided cranberry juice for the young skiers, and today Swiss Miss serves hot chocolate for all the Barnebirkie skiers at the finish. As with any event, “without the many volunteers,” Gardner added, “it just wouldn’t have happened.”

From its days as the Cable Bill Koch Birkie Race through today’s contemporary Barnebirkie, cookies have been a key component of the event. Literally, hundreds of dozens of cookies are prepared and donated to the event by volunteers and the Sons of Norway. Staffing cookie stations near the finish line, volunteers watch the diminutive skiers’ faces as they chug into the finish area: It’s not clear which they see as a greater reward for their efforts, the handsome Barnebirkie medal or a plateful of cookies.

While there may not be other children’s events quite the magnitude of the Barnebirkie, across the country the concept has indeed caught on, with Barne Loppets and cookie races common at Nordic festivals from coast to coast. From the first Cable Bill Koch Birkie Race over 20 years ago, an estimated 20,000 or more aspiring Birkebeiner participants have skied the Barnebirkie, many of whom (now in their late twenties and early thirties) have graduated to the Kortelopet or Birkebeiner, or continue to ski today simply for their own enjoyment.