ROUNDING A CORNER IN FULL STRIDE, KICK AND GLIDING ON SOME SUBLIME LATE-WINTER KLISTER MIX and suddenly the tracks ahead are tan instead of white, half an inch deep in leaves. I screech to a halt and jump out of the tracks, anything to keep from picking up a nice layer of foliage underfoot. If you ski in the hardwood belt that stretches from the Atlantic across the Midwest, you know that the beech tree is a lonely exception to the rule of deciduous trees. October comes and goes, Thanskgiving vanishes in the rearview mirror, the New Year begins-and still the beech tree clings to its drab and weathered leaves. Why? How come it won’t join the autumnal party? What the hell is it waiting for? 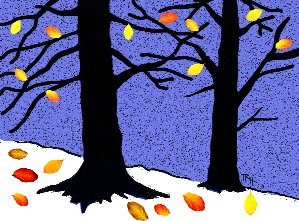 Beeches are marcescents, a tree whose leaves wither without falling-the beeches and some oaks. But to understand what’s going on, it’s easier to start with the maples and the birches and all the other well-behaved trees who put on autumn shows for the tourists and then disrobe.

Sometime in September, weather and sunlight trigger hormonal changes in deciduous trees.  A corky “abscission” layer of cells forms at the base of each leaf. “Being waxy and waterproof, this layer of cells prevents both the loss of water and the entry of diseases after the leaves have fallen,” according to Wisconsin naturalist Roy Lukes. But the dam also cuts off the flow of sap to the leaves, and soon the green chlorophyll breaks down, and underlying reds and golds appear. As the connection between tree and leaf grows more tenuous, it is only a matter of time before a fall wind fills the air with their swirling glory.

But in the beech, and in other marcescent trees, leaf production keeps right on going through winter. The abscission layer doesn’t form nearly as quickly, and so, except for those leaves up in the crown exposed to really howling winds, the foliage can hang on until early spring. Then, when new leaf buds begin to swell, the old leaves finally drop away. Still, that’s only the mechanism-it doesn’t even begin to answer why these beeches behave in such deviant fashion. Or is it really so weird?

Maybe it makes more sense to ask why other trees drop the leaves they’ve spent so much energy making. In part, it’s because the whole idea of a leaf that makes them vulnerable-the tissue thinness, ideal for turning sunlight into sugar, also means that the leaves can’t survive a freeze. Unlike roots or branches, the veins of the leaves are uninsulated; the water would freeze in the cells and burst. Not only that, but anyone who has lived through an early autumn or late-spring snow dump, with its crescendo of cracking limbs, knows that the last thing a tree wants in winter is a healthy covering of leaves. On the contrary, evergreen trees retain their needles which are insulated by a waxy cover and filled with freeze-resisting chemicals.

Still, it’s hard to figure out why the beech and some oaks cling so stubbornly to their leaves. The leaves die, of course, and in their shriveled state present no threat when it snows. But why do they cling?

Some botanists have reckoned it’s a mere vestige of earlier history-that the ancestors of beeches once lived in more temperate climates, and like the live oaks of the South kept their leaves throughout the year.

But other researchers have pushed harder for an explanation. One intriguing hypothesis, currently studied by Scandinavian researchers, grew from the observation that young beech trees were more likely to keep their leaves year-round. Beech is a preferred winter browse for deer-but maybe, the biologists reasoned, if the tree kept its leaves it would force the thick-tongued animals to eat them along with the tender stems and buds. They’d fill their bellies sooner, even if less nutritiously.

Beeches should definitely be considered a magnificent part of the winter landscape. I shouldn’t complain about how stray beech leaves have gummed up my wax on more than one occasion, because on more than ten occasions, they’ve come to the rescue: late in a race, wax and form both disappearing, they’ve provided a few strides of desperately needed kick. More to the point, those thin and tattered leaves cling there all season long, whispering in the wind a testimony to sheer perseverance. They are a worthy flag for the rest of us odd enough to spend our winters outdoors in the cold.