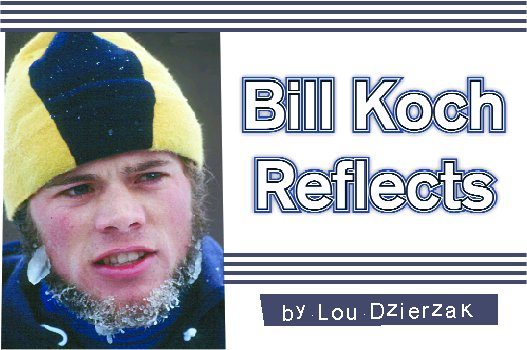 “The pure essence of cross country skiing is sacred and untouchable and will always be that way.” That’s the way Bill Koch describes the sport that has played such a major role in his life. Almost 30 years after he won a silver medal at the 1976 Olympics, the fire that fueled that performance still burns white hot.
Now however, his focus is much more private and intimate. Bill feels a deep connection to Mother Earth’s winter landscape. A soft-spoken man, his voice rises when he expresses his point of view: “I fanatically love this earth and the natural environment.”

At the time of this writing, Bill had already skied 35 days this winter. From his front door, he pays his respects to the natural environment. “Snow is a magical substance that lets you glide through nature and get connected to the animals,” he explains. “The landscape, stripped of its summer camouflage, reveals the places animals rest, nest and forage to the skier who ventures off the trail.”

“I think of cross country skiing and the winter environment,” he says, “as the ultimate combination of circumstances that people can use to build a personal connection to the natural world.” For Bill, nurturing that connection means building ski trails. Exploring his land on foot or on skis, he imagines the way a new trail could challenge a skier. With his artistry at work visualizing the landscape, he creates a path through the changing terrain. “I just love to go out to look at the landforms,” he explains. “I think about what is the best way to ski through them and find ways to integrate the beauty of the sport and nature.”

On his own property Bill has honed his trail building skills. A project with a neighboring major alpine ski resort may give him the opportunity to share his vision with other winter enthusiasts. Bill believes that alpine skiers are pre-disposed to discover the magic of cross country skiing. Creating a lift-served backcountry skiing experience may hasten that discovery. “The best way to introduce them is to take the sport to them in their environment at the top of the lift and turn them on to it that way,” he says. “If they are meant to connect with it, they will take more steps.”
The proposed project has less to do with financial gain than finding ways to draw interest to cross country skiing. Bill muses, “I dream about people rediscovering what skiing is, coming out of the lift environment and realizing this is where I really want to be–out with nature.”

But his ultimate ski trail extends much farther than his backyard or the top of an alpine ski resort. Bill envisions a wilderness backcountry route leading from the Berkshires in northwestern Massachusetts along the spine of the northern Appalachians. In his mind’s eye, one spur travels to the end of the Gaspe’ Peninsula. Another crosses the St. Lawrence and follows the high land to the northern tip of Labrador. Initial reaction to his wilderness trail has been positive, but turning the dream to reality will take more than the efforts of one man. “The route is there,” he says, “and perhaps if enough energy gathers around it, a very minimal trail might be established.”
To spread the word and build support for the concept, he plans to ski the route himself. “I wanted to do something that had a very strong environmental message,” he explains. Part of his message includes motivating people to protect a species migration corridor along the route and bring more wilderness designations to the landscape.

A private man who prefers family time to public appearances, Bill still draws notoriety wherever he goes. His name attracts attention. Signing a check is often followed with, “Are you the guy…?”

But for years, he has distanced himself from the competitive aspects of cross country skiing. Nevertheless, he still has strong opinions about the state of competition. “I’m really glad that my career was in the time period it was in,” he says. “I really don’t think I would want to be racing now. It’s not very attractive to me.”

From his perspective, competitive racing has moved away from skiing skills and technique to straight ahead brute force. Bill explains, “The essence of the sport started getting away from itself with the advent of grooming machines that made courses more like roads than courses that challenged skiing skills. Now, when I see major ski races on film, it’s just so straight ahead, there just seems to be absolutely no ski skills involved anymore.”

With the evolution in competition, Bill believes the FIS has missed opportunity after opportunity to guide ski racing so that it is not just a physical test but also a skiing test. “Courses used to be a skiing test when I started,” he recalls. “I watched them get less and less so through my career, and it seems to keep going that way. Now, it’s all about vertical climb and straight ahead downhills. Occasionally, you will have a turn that requires a little bit of skill.”

According to Bill, race courses need to hop back in time—back before bulldozers and groomers flattened them into roads. “I wish that skiing would get back to its roots,” Bill recommends. “That maybe someday in my lifetime, FIS will wake up and bring skiing back into the courses…start putting the humps, dips and changes of terrain that require you to know how to ski to win a medal.”

Today’s drug and doping issues also sadden Bill. “We used to pee in the cup,” he remembers. “Now they’ve taken it to the next step and take your blood. It gives me the chills. Anytime, any place, anyone can walk through my door with a needle and say, ‘stick out your arm.’”

The urgent search to find drugs to improve performance and beat the competition, Bill sees as misguided. “Now, all the focus is on drugs,” he says. “All the kids are thinking, ‘Gosh, I have to cheat or I can’t win. I have to figure out how to cheat without getting caught.’” He feels experimenting with drugs to get a slight edge has distracted athletes from another performance enhancing opportunity. “The real truth of the matter, there can’t be any drug that is more powerful than the power of the mind,” he claims. “That’s where athletes ought to be looking for the edge.”