By IAN HARVEY
Most people own waxless skis, also known as fish scale or step skis, for two reasons: They do not want to deal with kick waxing their skis, nor do they want to clean kick wax off their skis. For this reason, care of waxless skis needs to be quick and easy.
And it is! 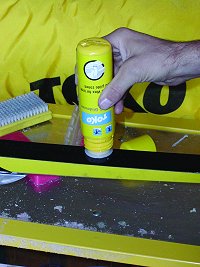 Two parts of a waxless skis need attention: the kick zone where the tread pattern is and the glide zone where the pattern isn’t. The goal is to keep the gliding surface of the ski water resistant and “slippery” and the kick zone clean. In order to prevent wet powder snow from sticking to the dirt that works its way into the tread pattern, the kick zone especially needs to stay clean. When snow sticks to the bases, turning and gliding become difficult, and progress is frustrating. For waxing ease, both sections of ski bases from tip to tail can be prepared with the same product with good results. Toko Grip & Glide Wax, Swix Easy Glide, or the venerable Maxiglide are products specifically designed for use with waxless skis. Either product should be applied to the entire base of the ski, both the glide area as well as the kick zone. The skis will glide faster, and the kick zone will stay cleaner to provide better grip while creating less friction to slow the skis down. Of course you always have the option of hot waxing the tips and tails of your waxless skis. While this is more involved and takes more time, hot waxing often provides a more durable and often faster wax job. Plus, you can also more closely match your choice of glide wax with the snow temperature. The procedure for hot waxing tips and tails of waxless skis is the same as waxing skate or classical skis.

After skiing, take a few minutes to clean your bases. It is a good idea to spray the base, especially the kick zone, with wax remover and wipe it clean with a base cleaning paper or paper towel. This will ensure that the base stays clean, so skiing continues to be fun. If dirt gets stuck in the tread pattern, a small brush can be used in combination with a wax remover to clean grit out. Toko’s GelClean, a wax remover with a bristle applicator top, and Swix’s Base Cleaner can be used effectively to rid skis of grimy matter stuck in the pores of the bases.

A few minutes of care for a waxless ski will provide better performance and a longer life for the bases. It’s quick and easy to do.