“I never thought CAT skis would turn into a mass market product. My biggest motivation was for myself,” laughed Dale Niggeman. While the invention of CAT skis started as a personal quest for self-improvement, today Niggeman’s dreams reach farther than his own race results.

At the urging of friends in 1985, Niggeman started cross country skiing. Like many Nordic skiers, he moved from casual tours to entering citizen races. Competing in both classic and skate events, he held his own in the skating races. “I started getting into classic skiing because my buddies were doing it more,” he said, but his results were nothing to brag about over beers at the end of the day. “I just got my butt kicked big time. It was really frustrating for me. Why could I skate well, but not classic? I was a good runner and decent skater, but why couldn’t I do classic?”

It’s not as if Niggeman wasn’t physically talented enough to compete. He is, after all, an elite wave Birkebeiner skier—more than sixteen finishes by his count. But finding the edge to shove himself from competitor to winner continued to frustrate him. He recalls buying a pair of classic roller skis. “I used them once,” he said, “and fell two or three times. Then I asked myself, why am I doing this?”

While every person handles frustration and stress in different ways—some losing themselves in Sunday morning crossword puzzles—Niggeman works out his dissatisfaction through inventions. He started to mull over ways of creating a roller ski that would simulate the kick of a ski. “There had to be some way,” he said, “to simulate this, so I could practice and perfect the push.”

Trying to envision a solution, Niggeman sketched different designs, but none of them caught his imagination. “I’d rather pioneer something new than copy someone. I’ve always been that way,” he said. Paging through a magazine, he saw a photograph of a European skier training on roller skis placed in an aluminum track. That did the trick. “I woke up at four a.m. thinking about a ski sliding over a track,” he said. “That’s when the light bulb went on.” The CAT Ski was born. 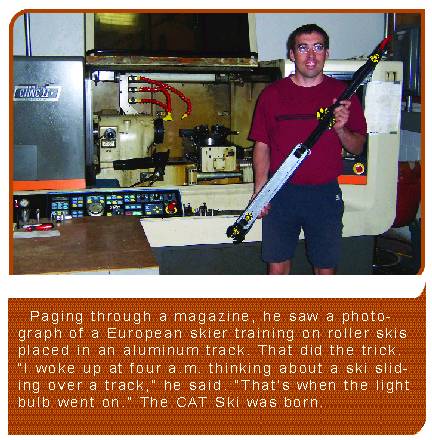 While the original design used plastic sliding on plastic, it mimicked two slippery materials moving against each other. Within two weeks, he manufactured his first pair. After using the garage-built device for two or three weeks, Niggeman raced and felt much better about the results. “The skis took me from not a very good skier to winning races within three weeks,” he recalled. “It gave me a significant advantage over everyone else.” At that time, the skis didn’t have a name. The Classic All Terrain ski moniker evolved over time. Early reaction to his training skis from fellow skiers was not as positive as he hoped. “Everyone thought I was crazy. No one saw the potential like I did,” he said. “While the original pieces were noisy and weighed almost 10 pounds apiece, people focused on the negative things and didn’t see the glimmer of what it might be.”

Between the first prototypes and the CAT skier products offered today, trial and error modified the CAT ski. “No one had ever made something like this before. Deciding on the right bungee materials was the first challenge,” he explained. With bungee materials that stretch 800 percent, Niggeman was able to design the CAT ski. The original models didn’t have grippers on the bottom surface, and they wore out too fast. Niggeman tested materials and altered how he integrated them so the screws didn’t grind on the ground. To handle the coefficient of friction between the two sliding pieces, Niggeman experimented with hundreds of different chemicals to enhance the kick system.

Refinements came over several seasons of tinkering as time and money permitted. “There were some years I didn’t use them all,” he recalled. “Then I skied crappy. My wife said I had to get back on my contraptions.” Within a week, he won races again.

The Classic All Terrain ski stands now on its merits. As word of mouth spreads from Birkebeiner elite wave competitor to high school Nordic team coach to frustrated roller ski user, sales of the CAT Ski are growing. Niggeman is working with an MBA program in the Twin Cities to prepare a formal business plan to launch the CAT Skier across the Snow Belt. An enthusiastic salesman, Niggeman is excited about the prospects for his invention. “If you are doing something no one else has ever done, there’s a sense of gratification from doing it,” he said. “The worse case scenario is my wife and I will have a lot of CAT Skis until we die.”