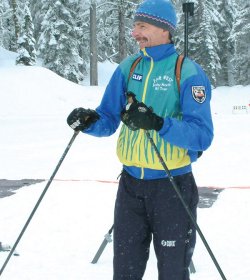 Glenn Jobe has played a pivotal role on several fronts in the advancement of Nordic skiing in the Sierra region. He grew up on a cattle ranch in northern California and went to school at the University of Nevada-Reno where he skied on the alpine ski team.

In his senior year he started cross country skiing, which he felt suited him well, and began attending races in the region. At one such event he met a biathlon coach and ended up attending a biathlon camp in Jackson Hole.

Growing up on a ranch, he was familiar and comfortable with firearms, and with his immersion in cross country racing, his attraction ……