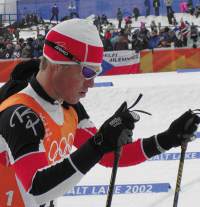 The lone non-Olympian was Gerhart, who won the bronze medal in combined at the 2002 Nordic World Junior Championships in
Schonach, Germany.

Bard Jorgen Elden, former World Cup athlete and a coach since the 1999 season, has been named head coach for Nordic combined. Denver University Coach Trond Nystad has been appointed head coach for the U.S. cross country program. Pete Vordenberg was named assistant coach. Chris Grover, who was the assistant coach last year has been promoted to Development Coach. Katie Gould is the Team manager. Chris Hall, who has been waxing for the US Team for going on three years, and Ola Berget, will serve as wax technicians.

Send the Kids Outside!

According to the U.S. Centers for Disease Control and Prevention (CDC), American kids have a major weight problem. The percentage of children and adolescents who are defined as overweight has more than doubled since the early 1970’s. The CDC report states that almost 13 percent of children and adolescents are now overweight. Childhood obesity contributes to health problems such as diabetes. On a positive note, the Outdoor Industry Association reported a 3.6% increase in number of teenagers who participated in outdoor recreation activities in 2001.

The Cross Country Ski Areas Association announced Janet Gates of Hardwood Hills, ON was named chair for the 02-03 season. The CCSAA is a North American trade group representing 350
Nordic centers and equipment suppliers.
Janet Gates is a senior consultant with the Ministry
of Tourism, Culture and Recreation’s Investment and Development Office. She owns and operates the Inn
at Hardwood and was a manager at Hardwood Hills Cross Country Ski and Mountain Bike Centre. Under her leadership CCSAA is poised to develop a marketing plan for cross country skiing and refocus its attention on continuing education for its Nordic centers.

Newly elected representatives to the CCSAA Board include: 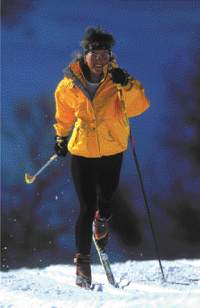 The Atlas Snow Shoe Company announced a strategic partnership with the Women’s Sports Foundation® to promote the
sport of snowshoeing to a larger audience of women. The Women’s Sports Foundation works to ensure participation and leadership opportunities for all girls and women in sports. Information about the Foundation’s work
will be found on each of the Atlas Elektra brand women’s specific snowshoes. Money raised from Elektra sales and events
will go to support the Foundation’s work.

End of the Season Sales Report Specialty Stores Down 3.8%

The sales of winter sports products fell 4.8 percent in 2002 compared to the same period in 2001, according to the SnowSports Industries America (SIA) Retail Audit.

In dollars, that translates to $2.1 billion in sales compared to $2.2 billion last season.

Apparel and accessories both saw losses at 5.3 percent and 8.0 percent, respectively. Sales for apparel tracked at $451.5 million while accessories were $491.2 million.

Last season sales for apparel were $476.9 million while accessories were $534.2 million.