The Big Show Plus

Last winter, the Torino 2006 Winter Olympics was the big snow show-the entire international early season a big build-up to the Games and the entire post-Olympics…well, a post-Torino hangover. Were it not for the seemingly endless parade of notable references to North American athletes, the entire winter might have boiled down to just two weeks in February.

Things got started normally enough on the World Cup. On artificial and trucked-in glacier snow, the now-traditional German downtown Dusseldorf October sprint weekend led a month later into the early Scandinavian openers. While a mixed bag of men rotated on and off the podium, the question was when-or if-any women would slow down the dominance of Norwegian Marit Bjoergen. Starting in Dusseldorf, Bjoergen rattled off four individual wins in the first five World Cups until her body shut down right before the Canadian-hosted December World Cups.

At precisely the same time that Bjoergen ran out of steam, the Canadian women started hogging the spotlight. That’d be women, as in plural. Last winter, podiums were no longer just the Beckie Scott show. While Great Scott truly had a grand farewell tour, her national mates didn’t perform too shabby either. With two Canadian venues-Sovereign Lakes and Canmore-stepping up to face the daunting financial and logistical challenges of hosting World Cups, home cooking was served in spades as Scott racked up two wins and two silvers while Sara Renner powered to an individual bronze and paired with Scott for a sprint relay silver.

On the men’s side, German Tobias Angerer’s two wins in Canada laid the groundwork for the third consecutive overall World Cup title by a German male skier.

Skip ahead to the World Cup tour just prior to the Olympic openers where the stage was set for more fireworks by Canadian women, albeit somewhat unexpected. Renner ripped a silver at Switzerland’s Davos stop where a young “who is she” named Chandra Crawford also primed the Olympic drama pump with a third place sprint effort. In portents of things to come, Scott skied just a tiny bit off her game…and Marit Bjoergen continued to battle illness.

Then, it was show time.

Shoehorned into a narrow valley below the Sestriere alpine ridge, the Pragelato venue featured a course that screamed “you get what you see.” A couple brutal climbs, two screaming downhills, a few rolls along a river drainage and a stadium. That’s pretty much it. Short loops for maximum stadium visibility reiterated the modern venue trend (although organizers misplaced the stadium by a couple hundred meters). With minimal room to reach wicked hard World Cup specs for climbing, designers just ran the courses up a cliff and dropped everyone back down again. You won’t see a lot of future citizen events on these courses. Ever.

The Games kicked off with a couple nifty sprint finishes in the pursuit-won by Estonian Kristina Smigun and Russian Eugeni Dementiev and continued high drama to the final day. A near no-show during the World Cup campaign, Smigun also won the 10 km ahead of Bjoergen who had her only bright day of the entire Games. With the men’s side a parade of names on the podium, the Italian dominance in the relay made the biggest story.

For the U.S., the high spot came in the individual sprint events where Alaskan Kikkan Randall posted a very notable ninth place effort while Andrew Newell came in 16th. Randall’s finish was the best Olympic result by a U.S. female in history. Otherwise, the American team had a tough time of things. Once again, Canadian women provided the big headlines. With a well-publicized bronze (then silver, then eventually gold) in Salt Lake four years prior, Beckie Scott had the unfortunate weight of being the favorite heading into the Olympic opener in Torino. Skiing just a wee bit off bounced Scott to sixth in the pursuit with ironically a stellar and historic finish despite her own shining credentials. Shaking off the opening disappointment, Scott turned in arguably the performance of the Games with a rocket-fueled recovery leg in the sprint relay after teammate Sara Renner broke a pole. Eventually outsprinted by Sweden, Scott and Renner grabbed silver for only the second time in history by non-European women. That notable footnote lasted exactly one weekend until the little known Chandra Crawford stunned the Nordic world with a win in the women’s individual sprint. Proving the gods of sport have no shortage of ironic spirit, Crawford pushed Scott off the podium preventing a career Olympic hat trick. 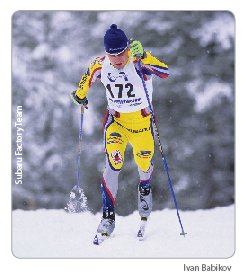 In almost every respect Team Norway had a bust of a Games on the XC side. The lingering illness and form issues for Marit Bjoergen set the tone on the women’s side as Bjoergen was nearly unstoppable a year earlier at the 2005 Worlds and took her teammates along for the ride. But in 2006 with Miss Marit only able to squeak out one medal, the Norge powertrain was stopped cold in its tracks. On the men’s side, the biggest problem for Norway was that other nations simply had better match-ups in the events slated for the Games. The red and white had plenty of talent to put on the trails (and left plenty behind at home-we’ll talk about that another time), but it really seemed like the wrong skiers were often on the start line. It could well have been that the ever-evolving international event line-up finally has caught up to even mighty Norway. The high and low points for the cradle of skiing were no doubt Frode Estil’s sizzling comeback in the men’s pursuit (high) and the men’s 4 X 10 relay disaster that saw the two-time defending champions fail to even make the podium.

After the Olympic circus closed shop, the World Cup moved into frequent flyer mode with stops in Scandinavia, China and Japan over the span of a couple weeks. Shaking up the headlines a bit, a welcome late charge from the U.S. came in when Andrew Newell powered to a third place in the Changchun sprint while Kikkan Randall inched closer to the podium with a fifth place in the March Swedish sprint. But for the season’s remainder, headlines were all Canada. After Beckie Scott, who during pre-season announced her end-of-season retirement, shook off her disappointing Games with a furious charge at a now recovered Marit Bjoergen for the women’s overall World Cup title. Trading big performances across the globe, the two battled to a prize fight caliber finale in Sapporo, Japan. Scott won her last World Cup race, but Bjoergen won the war taking the overall title by just 16 points. By comparison, the men’s race was a yawn-fest with Angerer cruising to a 252-point win over Norwegian Jens Arne Svartedal. On the domestic front, the leading performance of January’s U.S. nationals was not by an American, but by Russian native Ivan Babikov. He cruised to three race wins at Soldier Hollow before returning home for a successful bid to make the Russian Olympic Team. 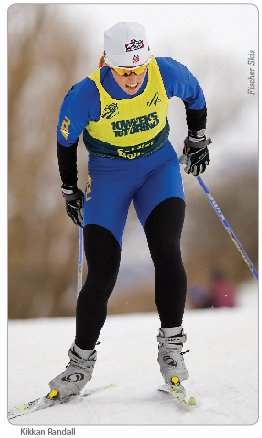 While the 2006 Olympic cycle arrived and fled, the U.S. Ski Team failed to make good on the promise of a Torino medal. While the lack of a U.S. Olympic medal seems like a half empty cup, the cup half full perspective followed the Games when American skiers lobbed in Newell’s Chinese surprise plus Randall’s two top tens. A stable of young talent is grooming to carry the U.S. torch towards 2010, and certainly Canada’s Crawford proves that it just takes one day for lightning to strike. It’ll be an interesting four years to come!