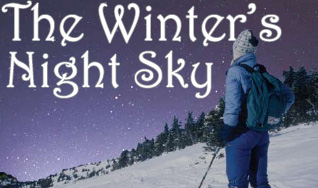 Every so often the heavens give you a reminder — and it can happen at the oddest times.

For me one of those reminders came while grooming a course for a cross country ski race. It had been a long day. I had been out manhandling an old, used Swedish snowmobile, dragging a homemade wooden track setter for the next day’s race.

I had named the machine “the Beast” for its cranky disposition. Time after time, the Beast had lived up to its reputation. It would suddenly stop for no reason and it had a maddening habit of burrowing itself deeply into the snow. When it did, I’d have to dig it out with a small shovel that I carried for that very purpose, knock the skids loose, and push against its 800-pound frame with all of my 150 pounds to get it moving and back on the trail.

Finally, way out on the course near a steep drop we called Suicide Hill, the Beast sputtered to a final and complete stop. No matter how much I cranked the starter and fiddled with the carburetor, the Beast wasn’t going anyplace.

By now it was completely dark. I banged the Beast’s engine cover shut, mumbled a few choice words, and pulled out my skis — which, like the shovel, I carried for such a contingency and which, as you have probably deduced, had been needed on several previous occasions. As I skied off, I looked back at the Beast who seemed to be sitting quite happily and contently in the middle of the trail.

For a while, I skied through the darkness, frustrated, completely unaware of my surroundings, vaguely following the track by feel. I was thinking about how best to put an end to the Beast (the two methods I had devised were dropping it over a cliff and running it over with a D-9 Cat). But about then I happened to glance upwards.

And what a sight I did see! I stopped in my tracks. There, arrayed before me, was the most dazzling display of stars I’d ever seen, stretching exquisitely from one horizon to the other. I was stunned.

You can go for many months, years even, and not really see them. They’re there, of course, but suddenly one evening, you look up, and you see them in all their glory. I found myself catching my breath as I was once again reminded of their beauty: the glorious, unfathomable dark night.

“For my part I know nothing with any certainty,” wrote Vincent van Gogh, “but the sight of the stars makes me dream.”

Are the stars any more beautiful and dazzling than in the winter? On a cold, crisp, moonless night they seem to leap out of the sky. Robert Service, the poet of the frigid north country, described the winter stars as “dancing heel and toe.”

In fact, they are brighter in the winter since there are more stars with a higher magnitude present than in other seasons. The winter is truly the season of stars. The days are short in the winter and the night rules. As early as 6:30 p.m. in the winter, the stars are fully out, and what a joy it is to bundle up, slip on the skis and go for a little winter star gazing.

Out of the myriad of stars that night, I was immediately drawn to Orion. Along with the Big Dipper, it’s one of the two best known constellations. Some star observers call it the most magnificent of all of the constellations.

What gives it away are the three equally spaced and bright stars of Orion’s belt. Just above the belt are two prominent stars forming his collarbone. Orion is known as the hunter and it’s the one constellation that is shaped like i ts namesake: the hunter’s broad shoulders, the magnificent belt and lower stars representing legs or the bottom of his cape.

You’ll find Orion on the star charts included with this issue of Cross Country Skier. In addition to Orion, the
charts show the other primary constellations of the winter season. 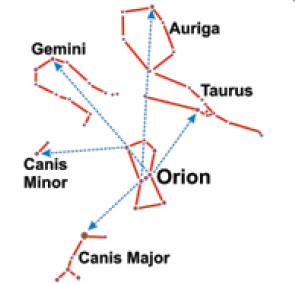 Orion is important to skiers for it heralds the beginning of winter. In the snow country of the United States and Canada, Orion is not visible in October. But in November, in the early evening hours, it rises above the eastern horizon. When we first catch of glimpse of Orion in evening, we know that winter is on its way.

By December, Orion is in mid-sky, marching nobly to the Southeast. By January, it is high in the southern sky. By March, in the waning days of winter, it is moving to the west horizon or, in Tennyson’s words, “Great Orion sloping slowly to the west.”

Various stories have come down to us about Orion, but he is usually described as a hunter or warrior, the son of the sea god, Poseidon. He had the ability to walk on water. In one version of his story, he was stung to death by a scorpion for his cockiness and boastfulness. Artemis, one of the daughters of Zeus, was his lover and hunting companion. After his death, she had him placed in the sky so that he sets in the west as Scorpius, Orion’s slayer(and a constellation of the summer),
appears in the east.

Orion is accompanied in the sky by his two loyal dogs: Canis Major (the Great Dog) and Canis Minor (the Lesser Dog). Canis Major is
easy to find in January and February because it contains the brightest star of the night sky. To find it, face directly toward Orion’s belt of three stars. Connect the three stars with aline and extend it toward the lower left (toward the horizon). The line points directly to Sirius.

It takes some imagination to get a dog out of the combination of stars in this area. Think of the star Sirius as an enormous diamond in the Great
Dog’s collar, and from there you can make out something of a short front leg, a hind leg and a tail.

You can also use Orion to find other adjacent constellations such as Taurus (the Bull) and Gemini (the Twins). For example, following the three stars of his belt to the right (upward in the sky) points to the brightest star in Taurus. You’ll see how this works and how to find other constellations by looking at the following chart. 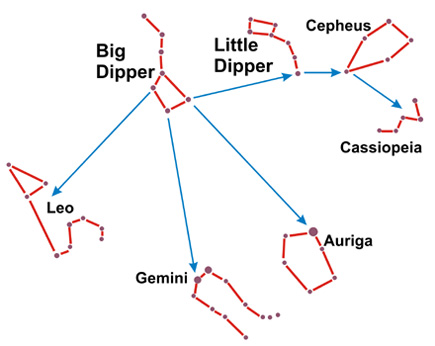 I was in a perfect location that night to observe Orion and his companion constellations. A good portion of the race course that I had been grooming
went across a farmer’s wheat field. It was in a rural area with only a few scattered farms and, from where Iwas situated on a rise in the middle of the field, my view was unhampered by light of any kind.

My vehicle was parked about a mile away at the end of a little traveled road, and the air was still and soundless. To the north of me, not far off, was the remote corner of a nearby Indian reservation. Pointing me in that direction was the North Star; not the brightest star, but certainly the most important in the night’s heaven.

I found it quickly by drawing a line through the so-called pointer stars in the Big Dipper. The North Star (or Polaris) has been used to guide travelers through the millennia.

Polaris is the central point around which the heavens rotate. That’s because Polaris is lined up with the North Pole or, more descriptively,
Polaris is aligned with the Earth’s axis of rotation. As the Earth rotates, Polaris appears to stay in one place while all of the other stars rotate around it.

In mid-winter, if you were to step outside and check the Big Dipper each hour as the evening passes, you would see it move around the North Star in a counterclockwise direction. As the evening hours blend into early morning , the dipper will arch up higher in the sky, its cup gradually tipping more and more toward
the horizon, eventually spilling its cosmic contents.

The ancient Greeks clearly had an inventive bent when they saw a bear in the stars that make up Ursa Major. But the Greeks weren’t the only ones with such an imagination. The Chinese and even the northeastern Indians of North America saw a bear when they looked in the northern skies.

Like Orion, the Big Dipper can be used to identify other constellations. As you say know, by using the pointer stars of the Big Dipper you can extend
a line out to find the North Star. If you extend the same line even farther past the North Star, you’ll reach a constellation shaped like a house with a peaked roof. The line points to the peak of the roof. You have found Cepheus (the King).

After you find the King, then the queen of the sky, Cassiopeia, is alongside. Look just beyond Cepheus, farther along and slightly above the same line extending out from the North Star, for the “W” shaped constellation of Cassiopeia. The “W” forms the chair upon which the queen is gracefully draped. These and other constellations you can find using the Big Dipper are illustrated in the following chart.

It was about then, while I was admiring Cassiopeia’s seated form that I began noticing the cold. I had lost track of time standing there with head craned skyward, enveloped in van Gogh’s dream world. The old broken-down snowmobile, the Beast— and any plans to dispatch it — were a distant memory. In fact, as I thought
about it, the track was finished enough, and the race could go on.

It was time to move on. Cares gone and feeling very much refreshed, I turned towards my vehicle’s location and glided down a long gentle incline underneath a sky alive with stars dancing to and fro.

The race went off the next day just fine. There was, however, one obstacle on the course. Racers had to make a detour around the Beast, who remained
unmoving in the middle of the trail where I had left him the night before.

Late that day, after the race, a mechanically minded friend of mine named Barefoot helped me get the Beast running again. We hauled it to his apartment which he shared with three other college buddies. Somehow, we got the machine through the front door and into living room, where Barefoot proceeded to tear it apart and re-build the engine.

I had to hand it to Barefoot. He knew how to pick his roommates. Over the next couple of weeks, they would wander through now and then, stepping over various snow machine parts strewn across the floor, and none of them seemed to think that a snowmobile in the living room was anything out of the ordinary.

Ron Watters couldn’t be happier when it’s cold and snowy. He is the author of eight books including Winter Tales and Trails and Ski Camping. Working to recognize good outdoor writing by others, he is the founder and chairman of the National Outdoor Book Awards, the largest book award program in the
outdoor world. He and his wife, and cross country ski companion, Kathy live in Pocatello, Idaho with Lizzy, an Australian Shepherd, and Scrapper and Annie, their two geriatric cats.