While we were away

Standard / by Cross Country Skier / October 15, 2002 / No Comments
Because there is no off-season in the Nordic skiing world, CCS has compiled the following briefing to bring our readers up to date on what happened in our sport over the past summer… 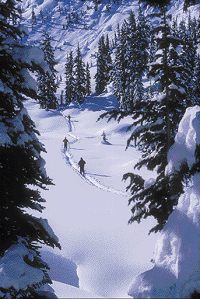 The report profiles nine recreation destinations located across the country from Georgia to California. Each location is housed within the 58.5 million acres of “roadless areas” covered by the popular forest conservation policy
formally known as the Roadless Area Conservation Rule that was issued in January 2001. Since this time, the Forest Service has placed this rule on hold and issued weaker interim directives. The long-term future of the roadless rule is in question. Participants in the Business for Wilderness program are concerned about the conservation of these special recreation areas around the country.

“Protect Today, Play Tomorrow” describes how roads would change the landscape and decrease the quality of the recreation experience in these wilderness areas.

For a copy of the report, go to: www.windhamdesigns.com/downloads/OIA_report.pdf.

Last year, Silver Star hosted several international athletes for pre-Olympic training in Biathlon and Cross Country skiing disciplines. Sixteen Olympic medals were awarded to these athletes at Salt Lake City, including Becky Scott, the first Canadian to ever win an Olympic medal in a Nordic discipline. Scott trains at Silver Star Mountain Resort during the Month of Nordic every November.

Nancy and John Miller, the owners of the Chippanock Inn in New Hampshire have decided it’s time to pass their historic home on a new owner. While most people would contact a real estate agent and put the property on the market, the Millers are taking quite a different twist. The Miller’s have created an essay contest to determine the new owner.

The Millers will pick a winner from essay answering the question,
“Why I want to own the Chippanock Inn.” In addition to the essay there is a $250 entry fee and a non-refundable $15 processing fee. The winner will receive all furnishings, kitchenware, bookkeeping materials etc. necessary to continue the current operations.

All essays must be the original work of the author and not to exceed 500 words. A minimum of 1,000 entries must be received by January 30, 2003. All entry fees will be held in an escrow account and if the minimum number of entries is not received by the deadline, the fee will be refunded within 30 days from the deadline.

Upon the close of the contest, a panel of judges will pick one winning essay based upon creativity, originality and sincerity. The winner will be notified within thirty days via certified mail. To enter the contest or for
more information visit
http://www.winabedandbreakfast.com

This summer Outdoor Life Network was reportedly considering dropping ski coverage for the 2002/2003 season. For the past several years, Outdoor Life (OLN) has been the exclusive home of Nordic ski coverage on the World Cup and major elite circuit. With race footage provided by World Cup organizers, OLN has broadcast taped competitions throughout the World Cup calendar. No other network covers these events on a regular basis.

Nordic enthusiasts will be happy to learn that Outdoor Life Network will
continue its broadcast coverage of major ski events. For competition
schedules visit their website www.olntv.com.

John Caldwell, of Putney, VT has stepped down from his position of Chairman and President of the New England Nordic Ski Association (NENSA). Caldwell has been instrumental in its growth in New England and in the United States. He was a member of the 1952 Olympic Nordic Combined Team. His coaching highlights include, U.S. Olympic Cross-country Team Coach at the ’68 Games in Grenoble and the ’72 Games in Grenoble.  He coached the Australian Team in 1980 Games in Lake Placid, and then was the Assistant Coach for the U.S. Team in Sarajevo in ’84. From 1990-94 Caldwell was the U.S. representative to the FIS Cross-country Committee.

The formation of NENSA in 1995 is Caldwell’s most recent contribution to the sport of cross-country skiing.

Taking over the Chairmanship position is John Upton, of Cape Elizabeth, Maine. Upton raced and jumped for Dartmouth College, graduating in 1975. Currently he is a shareholder/director of Perkins, Thompson, Hinckley & Keddy in Portland, ME. Upton and his wife, Anne, coach the Cape Elizabeth HS Nordic Team and co-founded the Cape Elizabeth Ski Club.