When you think waterskiing, you think: big boat, whining engine, smell of Coppertone mixed with engine oil. About as far as you can get from gliding silently through the winter woods, a hint of balsam in the air. In fact, though, all skiing is at its essence water skiing. Normally this column concentrates on the larger phenomena of the winter world-the habits of animals, the tilt of the sun. This time, though, we’ll look at the smallest possible slice of nature, but the one that nonetheless makes cross country skiing possible: the impossibly thin layer between ski base and snow.

“A ski requires a film of water to glide on,” said Zach Caldwell, who runs EngineeredTuning.net, and may spend more of his life thinking about ski bases than any other single human being. “It can be very thin-just five or six molecules deep-but it’s got to be there.” The molecules of unfrozen water, explained John Chen of Dartmouth’s Ice Lab, are spherical-they act as a lubricant, letting the skis slide.

Simple enough. Except, of course, that winter’s main feature is frozen water. So how do you get enough to glide on? At the very coldest temperatures, you don’t: When it’s forty below zero, said Chen, you can walk easily across the ice without worrying about slipping because it’s simply too cold for that water layer to form. 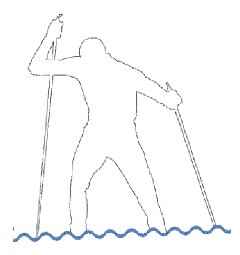 At warmer temperatures, scientists always assumed that the ski’s pressure against snow was enough to produce the heat necessary to melt the layer of water. Indeed, at temperatures fairly near freezing that’s what happens: The pressure of, say, a hundred pound skier going 60 m.p.h. downhill is the equivalent of three 100-watt light bulbs strapped to each ski. With that much water, the main engineering challenge is figuring out how to get rid of excess water before suction provides extra friction, slowing the ski down. That big groove down the middle of your ski base? That’s what it’s there for. But if you really want to glide, you need more: You need thousands of microscopic grooves, and you need them arranged in a bewildering array of patterns depending on temperature, humidity and snow structure.

That’s where Caldwell comes in: He’s installed a stone grinding machine in a truck that once housed a mobile M.R.I. unit; he drives it to all the big races. Elite skiers drop their boards off the night before, and he figures out just what kind of channels will most effectively eliminate the moisture the next day.

The U.S. ski team hired Caldwell to grind a bunch of their race skis with a new pattern he’d developed for reasonably cold snow. It features short grooves that cross each other at thousands of junctions. They create enough turbulence in the river of water flowing along the ski base to break the suction. “Sometimes in the summer I go to Lake Placid and watch the aerial skiers practice their tricks,” Caldwell explained his concept. “They land in a pool of water, and the people who run the pool are always bubbling air up from the bottom to break the surface tension so that they don’t smack too hard when they hit. We’re doing the same thing on the bottom of the ski-breaking up the surface tension.”

The need to get rid of excess water also explains why racers spend hundreds of dollars on expensive fluorinated waxes. Fluorine, explained chemist Marc Desrosiers of Racewax.com, is about as hydrophobic as a molecule can get. Desrosiers manufactures the stuff in his basement for, well, bargain basement prices. If you think oil and water don’t mix, try fluoros. Fluorine particles are about five microns in size, a quarter the diameter of a human hair, tiny enough to fill the little voids in a ski’s base, preventing water from accumulating.

I remember the first time I ever skied on pure fluorocarbon: One year at the American Birkebeiner when the temperature was above freezing and a light rain was falling, I passed most of my wave and most of the wave ahead of me, and not because I was a more manly fellow. Because I’d put the good stuff on-it was a giddy day.

But what if it had been colder-say 15 degrees? How would I have generated enough water to keep my skis sliding? Until recently, most scientists had assumed that pressure alone would still produce enough friction to melt that thin layer. But new research indicates something quite different, and considerably odder, may be going on at colder temperatures. “The heat simply dissipates too rapidly into the snow, which is an almost infinite sink,” explained Chen. “Instead, you have to have glide wax on. The snow crystals puncture that wax and stick for a second. As they break, the shear itself creates enough heat to melt the necessary water.”

The more that chemists and physicists learn about the thin whitewater river that rolls along the base of a speeding ski, the more new tricks they propose: This year’s high-end additives, for instance, include graphite, which may reduce the electrostatic charge along that layer.

Chen believes that “electric skis” might replace wax altogether a few years farther down the road: His prototype version senses when you weight the ski and in a millisecond freezes the water along the base, giving you perfect kick; as soon as you unweight it, an electric charge melts the ice, giving you perfect glide. “It’s much more natural than trying to put on an interface of glop,” he insisted, adding that he’s “talking very seriously with major European ski manufacturers.”

Water, as every clich  artist knows, is the stuff of life. But it turns out it’s the stuff of skiing, too. Which is at least a little consolation as we watch the winter melt away.