Wednesday, 10 a.m.
“This is the final exam,” John Rubright is saying. “This is what makes me anxious all year. And I do get anxious.”

Middlebury Winter Carnival is 48 hours away, and Rubright—as he has for the last 23 years—is in charge of preparing the college’s Bread Loaf mountain campus for two straight days of Nordic ski racing. Middlebury is always the last stop on the carnival circuit, and the races always double as the eastern championships. And Rubright is always—well, worried is not the right word. His crew knows how to set up the start and finish, knows where to set up the timing equipment, knows every last detail down to making sure there’s an endless supply of hot chocolate for spectators. He also knows that the best-laid tracks can come to naught. One year, just as the last race was set to start, the temperature soared to 60 degrees, and a raging thunderstorm blew through—lightning struck a lift at the Snow Bowl, the college’s downhill area, which is just up Vermont 125 from the Nordic center. “Sometimes you can only do so much—nature is going to deal the cards,” Rubright says. “Every groomer has some sort of trick up his sleeve, but finally, sometimes, you’re just going to say you’re defeated.”

Right at the moment, you couldn’t ask for better conditions for a ski race. Weeks of straight cold have left the snow fast and hard, and as we pass in the college’s Pisten Bully grooming machine, we leave a corduroy carpet behind us. “At this temperature it’s like velvet. It sets up so nice,” he says. But the weather forecast that comes in through the satellite dish above Rubright’s waxing bench sounds ominous: temperatures warming into the 40s on Thursday, and staying there for the first day of races on Friday. And then—sometime on Friday night or Saturday morning—some combination of sleet and rain and ice. The forecasters call it “wintry mix,” which sounds like something you’d snack on at a Christmas party. But for the ski trails, it might spell real trouble. “There’s going to be snow on the ground. The question is, how are we going to groom it? You can’t groom when it’s too warm, or it will just freeze up rock hard on you. We’ll just have to wait and see.”

Thursday, 2 p.m., 40 degrees
The sun is shining—shining hard, with warmth not felt since mid-fall. The sky is a perfect blue, and the racers from around the East have begun to arrive — Dartmouth and UVM in their green suits, Bowdoin in tights decorated with polar bears, even a small Harvard contingent, whose race suits show a map of Massachusetts Avenue climbing up from calf to shoulder. All that color, weaving in and around the bright yellow buildings of the Bread Loaf campus. In the summer, it’s home to Bread Loaf School of English and the world-famous Writers Conference—legacy of Robert Frost, high-powered novelists, revered story writers, eager young artistes perched in Adirondack chairs as they work on their latest stanzas. Come November, however, Rubright and his crew leave their work at the college golf course and decamp up into the mountains, ready to transform the place into its winter guise: the Carroll and Jane Rikert Ski Touring Center. Middlebury’s team, always one of the best in the nation, trains there most afternoons, and so does the local high school squad. The bulk of the clientele, however, have never worn Lycra in their lives: every season the center tallies between 6,000 and 7,000 visits from local school kids, arriving by the class every morning for a taste of Nordic skiing. “We do portions of all the schools in Addison County,” Rubright says. If they decide they like it, a family pass at the center runs less than a hundred dollars a year, which may be the single great bargain left in American outdoor sports.

“Our job is to expose cross country skiing as a lifetime sport,” says Rubright, and he’s been extremely successful. The numbers of participants have climbed steadily in recent years; a bustling Bill Koch league draws kids every weekend. Even this afternoon, as the college racers knife by on their practice runs with an almost insolent speed and grace, plenty of locals are pulling babies in pulk sleds or urging on well-wrapped five-year-olds as they tour the trails. Rubright will wait for all of them to take off their skis before he fires up the college’s Pisten Bully groomer, the almost magical machine that will turn the chewed-up snow into a first-class racecourse. He’s not too worried about Friday’s races: for one thing, they’re skate races, which means he’ll just have to groom the trails, not set the tracks that classical skiers will need on Saturday. And though the temperature has grown warm enough to soften the snow, it’s going to get plenty cold enough for good grooming. “We’ll wait until the snow temperature drops down to 26 or 27 degrees,” he says. “You can tell it’s right about when it stops sticking to your boots and starts to crunch instead. Then we’ll go out and get to work. We might be done by midnight.”

Friday, 10 a.m., 30 degrees
The women open this carnival, in a 5k race that might as well be a sprint. One after another they fly down the firm tracks, covering the whole distance in less than a quarter-hour. The snow couldn’t be any better, but the forecast couldn’t be any weirder. After a season of endless perfection, with a month where the temperature never got above freezing, it’s suddenly starting to sound like New England. A warm front will be “undercutting” an arctic air mass; moisture from the Gulf will hit air from the pole, and depending exactly where you are in latitude and elevation, some of every form of precipitation known to man seems likely to fall.

It’s the kind of day when you realize why 21 years of experience is a useful thing. The spectators lining the race course are looking at the snow, but Rubright, who has supervised two NCAA championships, and visited most of the great Nordic centers in the world, is thinking deep down into its layers, almost the way a geologist looks at rock. Every storm and every freeze of the winter is preserved in there, like the strata on the walls of the Grand Canyon. “It snowed this winter before the ground froze, so there’s not a frozen base at the bottom,” he says. “But that rain we had two weeks ago, it came right before the big freeze, so that’s been giving us additional base.” All winter, as he’s groomed and re-groomed the trails, Rubright and his team Tim Reilly and Jim Benson–have had this weekend in mind. “Every time you pass over it, the pressure creates a little bit of heat, squeezes some moisture out and allows the snowpack to bond a little better. Not only that, but it pushes the frost down into the snow: in effect, we’ve been trying to freeze the ground from above.” As a result, he says, even if the temperature doesn’t drop below freezing tonight, there should be enough cold percolating up from the bottom of the trail to freeze the snow so the groomer can make one last pass. “That’s the theory anyway.” 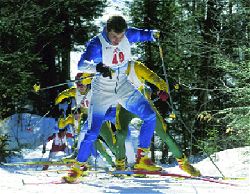 Friday, 11 p.m., 36 degrees
And the theory seems to be working. The air is still balmy, but the tracks crunch underfoot and Rubright is nowhere to be found in the cramped corner of the one Bread Loaf building that serves as the Nordic center. Instead, Benson is camped out by the fire, resting from several hours in the machine. He hands over the walkie talkie, and from somewhere far out on the course Rubright’s voice reports that the final tracks for tomorrow’s classic race are, even as we speak, being laid. “You can’t go more than about two kilometers an hour,” Benson says. “Otherwise the walls of the tracks won’t set up nice and hard.” At that rate, the Pisten Bully should trundle back toward home sometime between two and three in the morning.

Saturday, 11:30 a.m., 36 degrees
The sky is gray now, and the front is clearly pushing through. But the men have finished their classic race, and now the women have started theirs, a long ribbon of skiers disappearing up the tracks into the woods. The klister on the bottom of their skis grabs the softening snow and propels them on. As far as the grooming crew is concerned, there’s nothing more that can be done, nothing more that need be done.