The 5 Stages of a Snowpocalypse 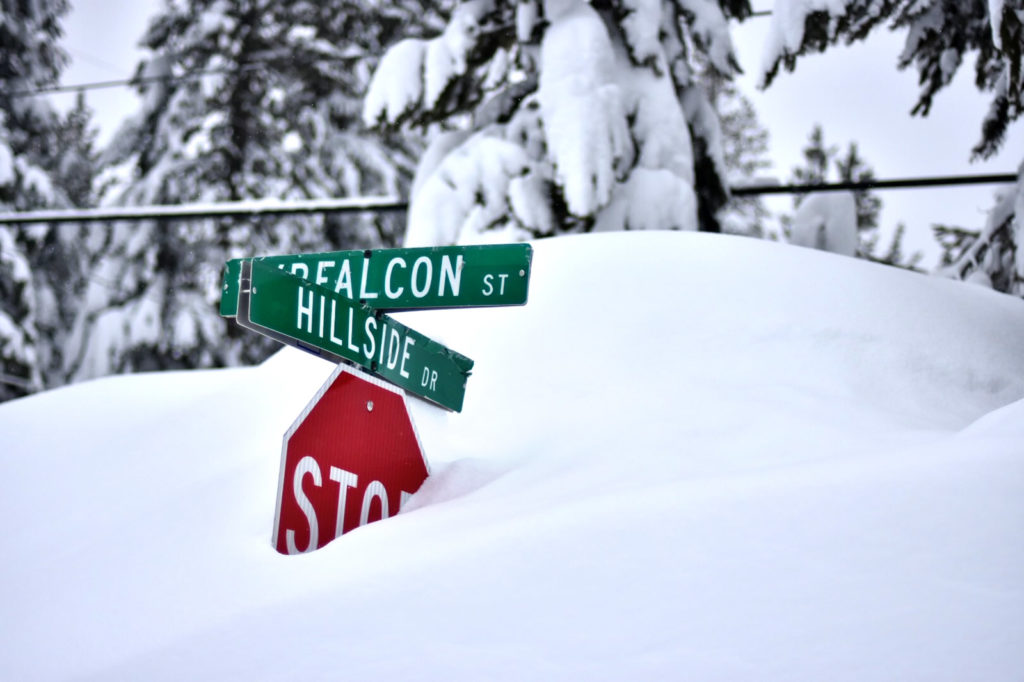 We thought we were headed to the Golden State, the land of brilliant sunshine, perfect corduroy and warm temperatures also known as California. After a week in Utah for U.S. Nationals that included rain, snow, sub zero temperatures and everything in between, California promised a welcome change of pace and weather as the next stop on the SuperTour circuit. We jumped a quick flight to Reno, Nevada and rented a respectable 4-wheel drive Nissan to carry us West to the Auburn Ski Trails located some 30 minutes and 1,000 feet in elevation above Truckee, California (Read more about the Auburn Ski Club and the Women of Tahoe in the Fall issue of Cross Country Skier Magazine). The Truckee races, scheduled January 21st -22nd marked the fourth major weekend of SuperTour racing, a follow-up to the early season SuperTours in West Yellowstone, MT, SilverStar, B.C., Canada and the recent U.S. Nationals races in Park City, UT.

“We lit candles and a fire and talked about which ski team we would eat first if it came to that. We decided probably the Craftsbury Green Team because they are grass-fed and organic.”

I first traveled to Truckee in 2009 as a U16 skier fresh off my inaugural international ski trip to Norway and eager to prove myself at Junior Nationals. The temperature hovered around 50-60 degrees Fahrenheit for the entire week of racing. Neon sports bras and spandex became the uniform of choice for me and the rest of the junior girls who spent most of our time sunbathing on the hood of team vans. I’ve been back to Truckee only once since then, for Spring Series in 2013, and the experience was nearly identical except that I remembered by sunscreen. I expected nothing less on this trip.

For the past five years, California has suffered a severe drought leading to snowpack levels that barely register as “winter” compared to the epic storms for which the Sierras are known. Year after year of low snow has forced mountain towns such as Truckee to reduce the number of snowplows and machines on call, no longer needing teams of people to clear the now snowless highways and dry roads. When signing up for the races in Truckee in December, the trails were brown. I did a little snow dance of my own, hopeful for a storm before our races in mid-January but, at the very least, felt optimistic about our chances of getting a nice suntan.

Turns out California had different plans. Over the course of five days, three separate snowstorms swept across the Sierras, each one growing in strength and dumping 7+ feet of snow on top of the existing 12 feet that fell earlier in the month. As a professional skier I spend a lot of time wishing for snow, employing various snow dances and, at times, desperate negotiations to convince the snow gods to deliver those precious white flakes. I never thought I would say this…but there is such a thing as too much snow. 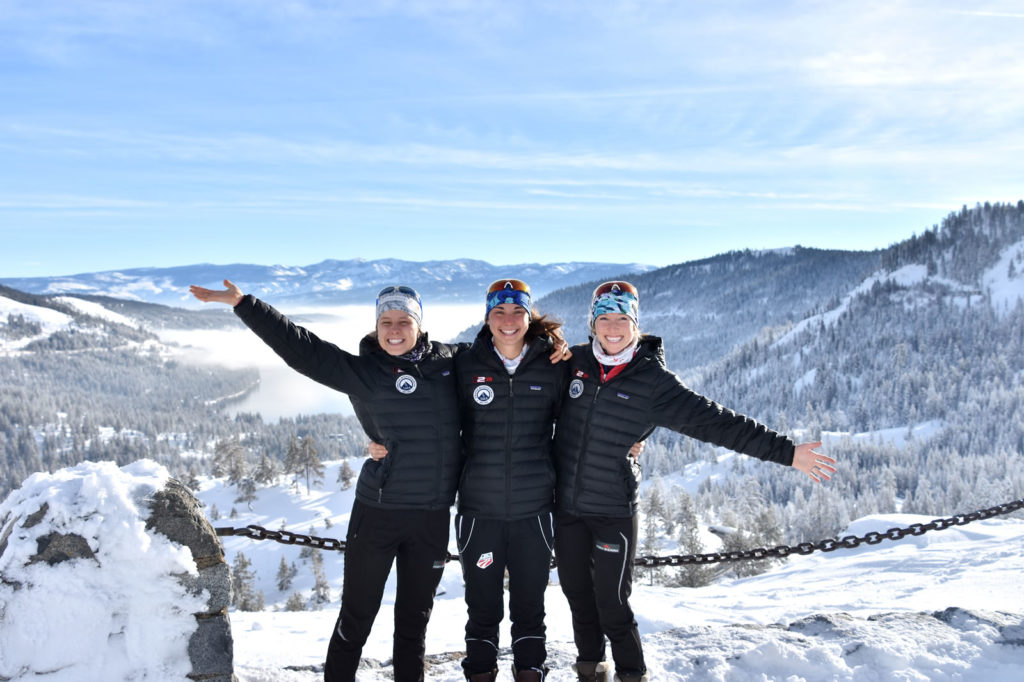 Stage 1: Anticipation
Blue skies and tall snow banks welcomed our arrival to California. We spent our first days prancing around the sparkling ski tracks and just barely noticing the labored breathing induced by skiing at 7,000+ feet above sea level. A quick peek at my iPhone weather revealed snow days in our future and surely a few snowmen and copious amounts of hot cocoa (the best way to enjoy a snowstorm). Although my teammate Annie Hart expressed some initial concern over the early storm predictions, we embraced our good fortune and took our skinny skis into the powder to celebrate. 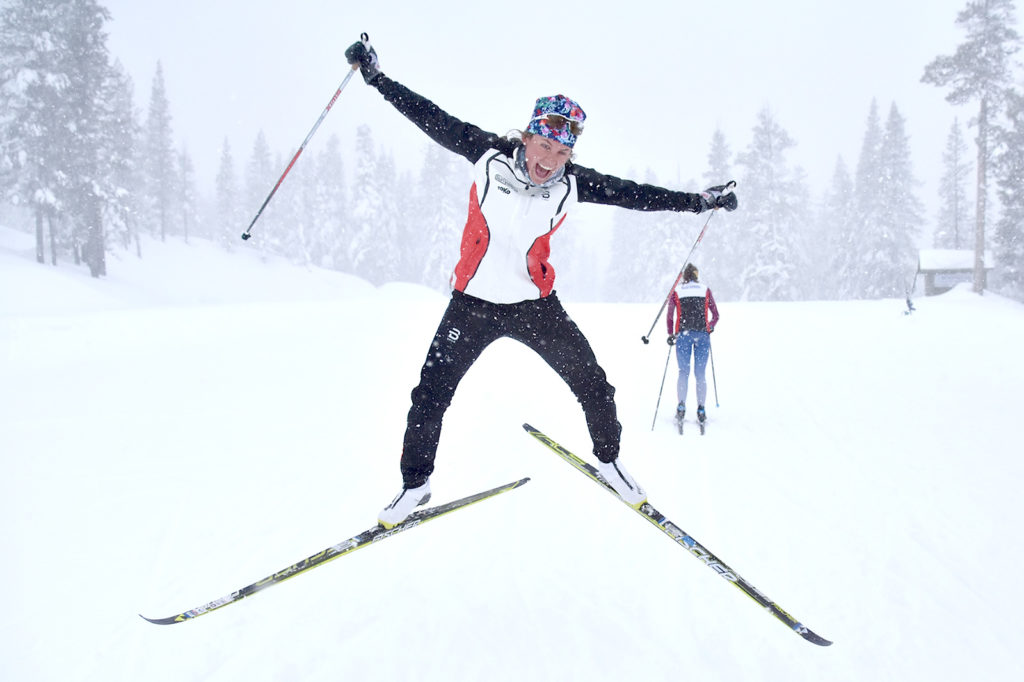 Stage 2: Joy
The first fluffy white flakes of any snowstorm typically induce giddiness reminiscent of Christmas morning. Cross country skiing depends on snow and as winter weather becomes increasingly unpredictable, any snow is good snow in my book. As the first storm rolled into Truckee on Wednesday the 18th, we marveled at the white spectacle falling outside our cabin door, made use of our snowball maker (a staple in most Truckee rental homes) and busted out the shovels. 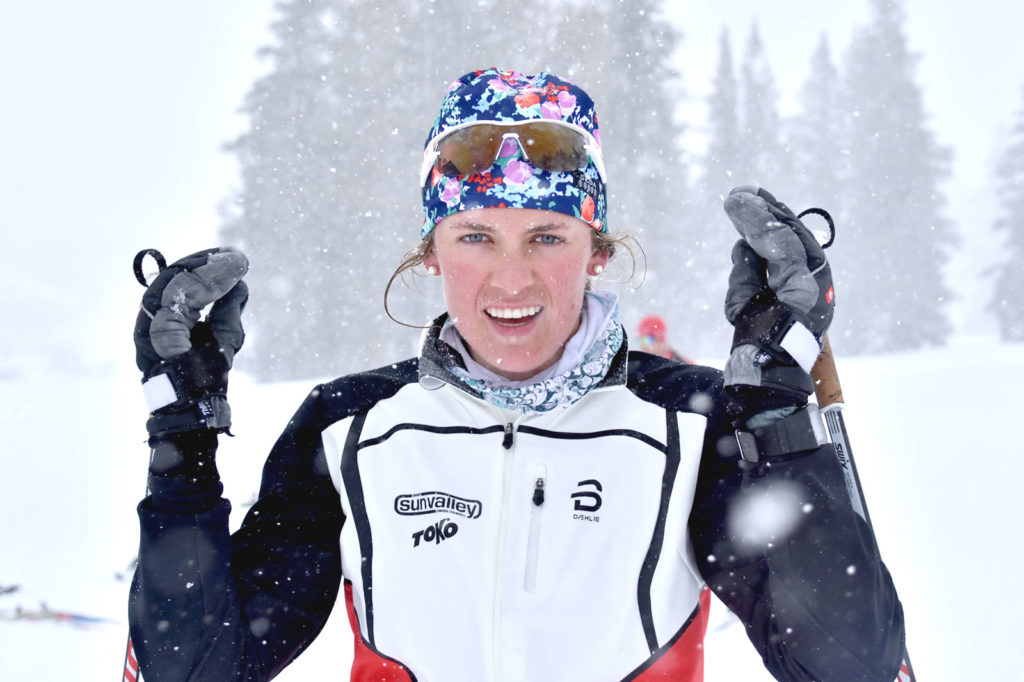 A little less sure about this. [Photo] Erika Flowers

Stage 3: Anxiety
By Friday morning the first storm had subsided, having dropped over two feet of snow and almost twice as much as forecasters originally predicted. Annie became our resident weather woman, checking road conditions and multiple weather reports nearly every hour on the hour. The race venue at Auburn sits at the top of Donner Summit off of I-80, not far from the infamous Donner Party encampment where 46 feet of snow forced a trapped group of pioneers to resort to cannibalism to survive in the late 1800s. The story was not lost on us as we watched the snow piles continue to grow outside our door. We looked to the weekend with a sense of apprehension. Road closures and delays on the highway increased and a brief inquisition by highway patrol preceded each trip to the venue to ensure we were equipped with either 4WD or chains. 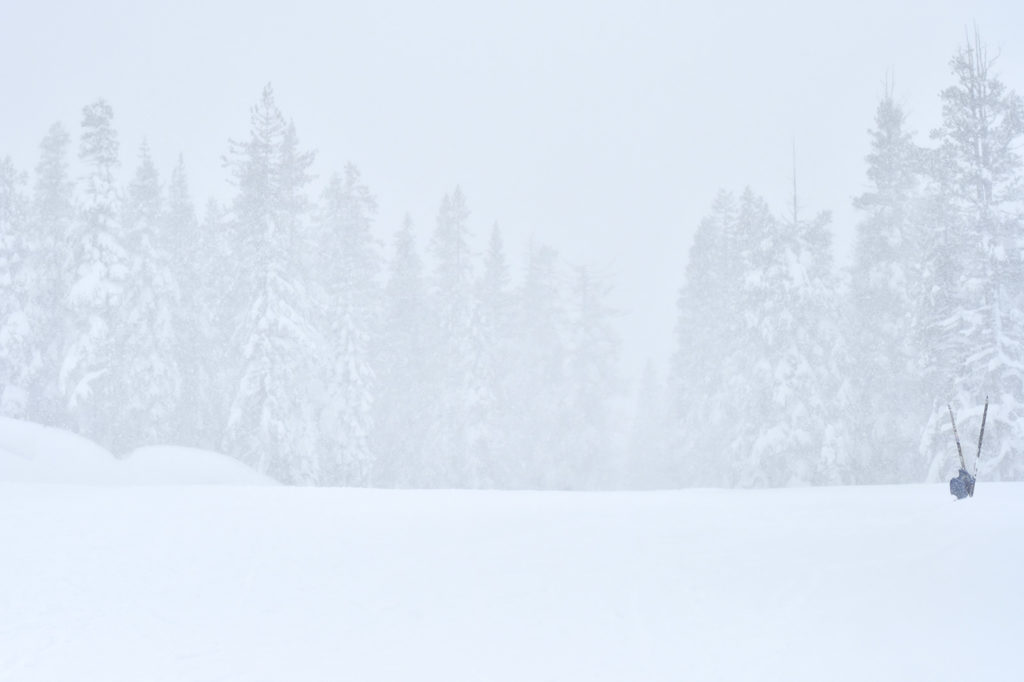 Getting deeper by the hour. [Photo] Erika Flowers

Stage 4: Fear
Friday night we lost power for the first time along with some 2,000 other homes in the area upon the arrival of snowstorm number two. We stocked up on water, Snickers bars and firewood, then raided our fridge making sure to eat our favorite Siggi’s orange ginger yogurt before it went bad. We lit candles and a fire and talked about which ski team we would eat first if it came to that. We decided probably the Craftsbury Green Team because they are grass-fed and organic. Although power returned late that night, Annie confirmed that the worst of the storms was yet to come. On Saturday morning we managed a trip to the venue without incident and raced a classic sprint with full heats. (I finished the day in 9th, respectable but not all that remarkable and Annie skied in just behind me in 11th). The success of the first day of racing temporarily mitigated any fear we had of cancellation for the following day. Plus racing in the snow wasn’t actually too bad! And then we lost power for the second time. By Saturday night the third major storm system was within a few hours of Truckee and promised another 3-4 feet of snow and wind gusts up to 100mph. 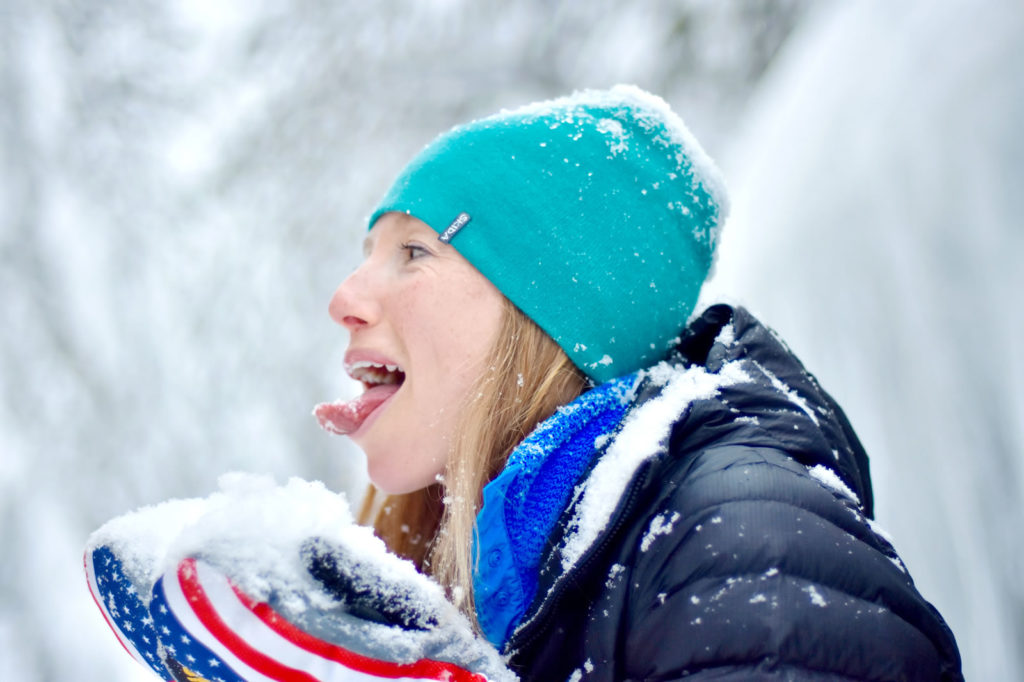 Stage 5: Acceptance
Due to safety concerns, high winds, blowing snow and the closure of highway 80, race organizers canceled our 5/10km skate race on Sunday morning around 7 AM. After the disappointment (and, for some, relief at not having to drive or race in a snowstorm blowing at 100mph) of the canceled competition sunk in, we took our pent-up pre-race energy to the streets for a skinny ski adventure. Without a plan, watch, map or even groomed trails we decided to explore the network of roads surrounding our rental house and eventually found our way to the alpine mountain and some off-trail powder play in the woods. A short “recovery” ski turned into a two-and a-half hour over distance session dodging plows while we turned the roadways into skiways. We left California without a tan or a skate race to our name but with a whole new appreciation for the advent of snow blowers and tall street signs. On to the next one…. 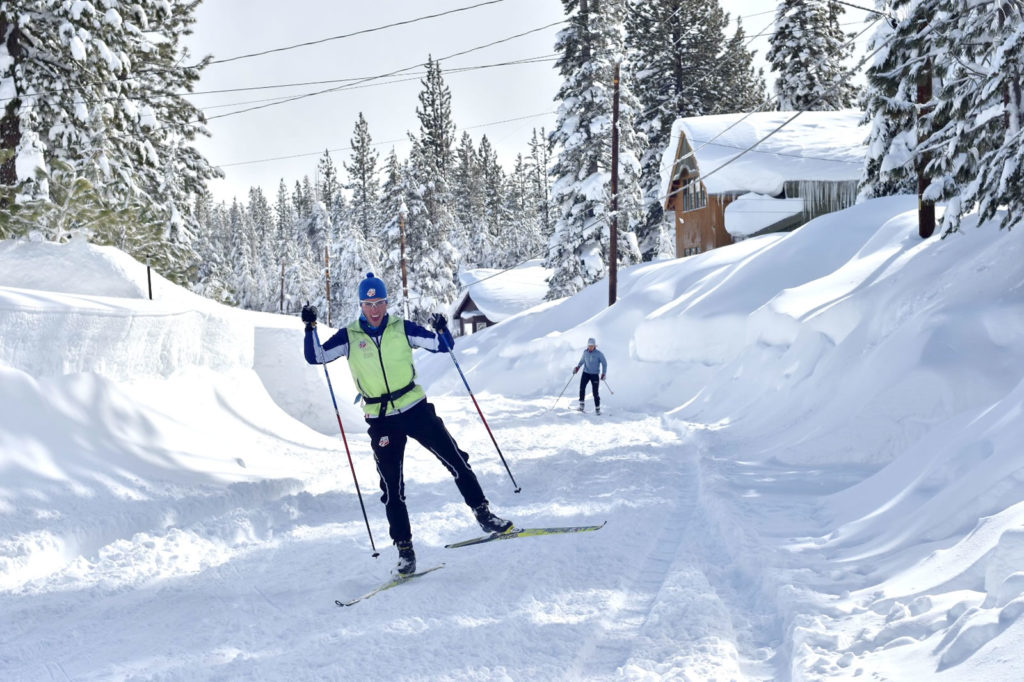 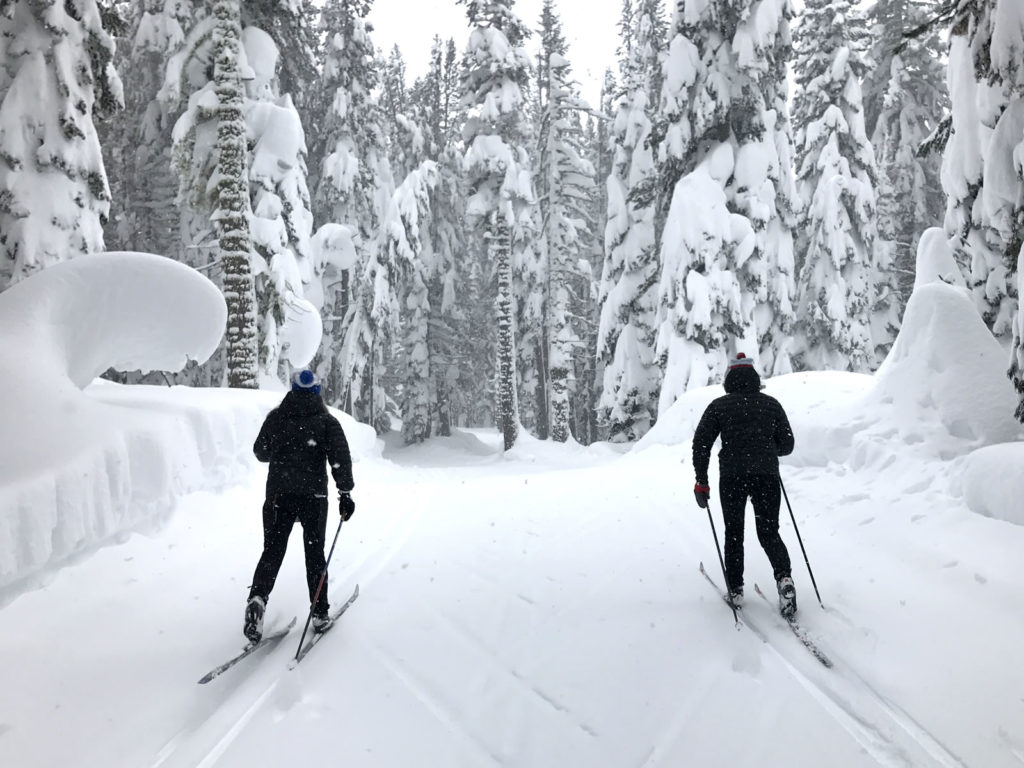 Snowy adventures in the woods with Julia and Annie. [Photo] Erika Flowers 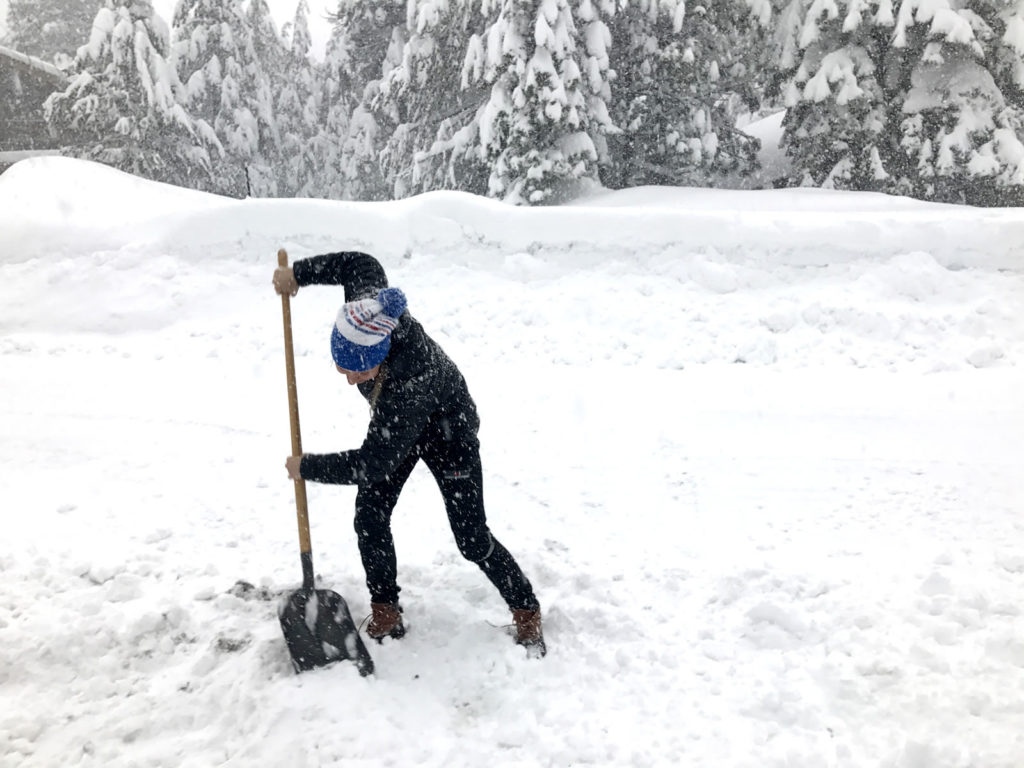 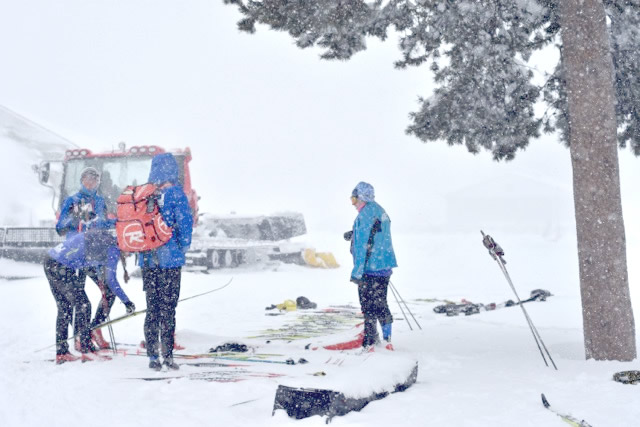