All That Glitters is, Actually, Gold: American women show heart, tears and progress in 4x5km relay

A decade before tennis legend Billie Jean King whipped Bobby Riggs in straight sets at the Houston Astrodome on national television in 1973 my mom was suspended from Burlington High School for wearing pants. Pants. As in, not a dress.

It was on my 14-hour flight to Seoul, South Korea to catch tonight’s Women’s Olympic 4x5km relay, that I watched Battle of the Sexes, the powerful movie based on how Ms. King backhanded a millennia of male-dominated thinking about women in sport. It got me thinking, not just about the American women’s cross country team and how far they’ve come, but of my mom and then my two daughters and the disparity in their sporting opportunities (Read, none and a ton: pre Title IX and four decades on). In 1972 when Barbara Ann Cochran won her Olympic Slalom Gold at Sapporo just across the Sea of Japan from here, there were 26 women on the U.S. Olympic team. Today, here in PyeongChang, there are 109.

Fast-forward 44 years and standing before me now are four American women: Sophie Caldwell, Sadie Bjornsen, Kikkan Randall and Jessie Diggins. They’ve just skied their hearts out before ultimately settling for fifth behind Norway, Sweden, Russia and Finland and their eyes do not relish the best-ever finish for Team USA in this event. Bloodshot and glazed, these eyes know they’ve just missed one of their best hopes for a medal at these Games. 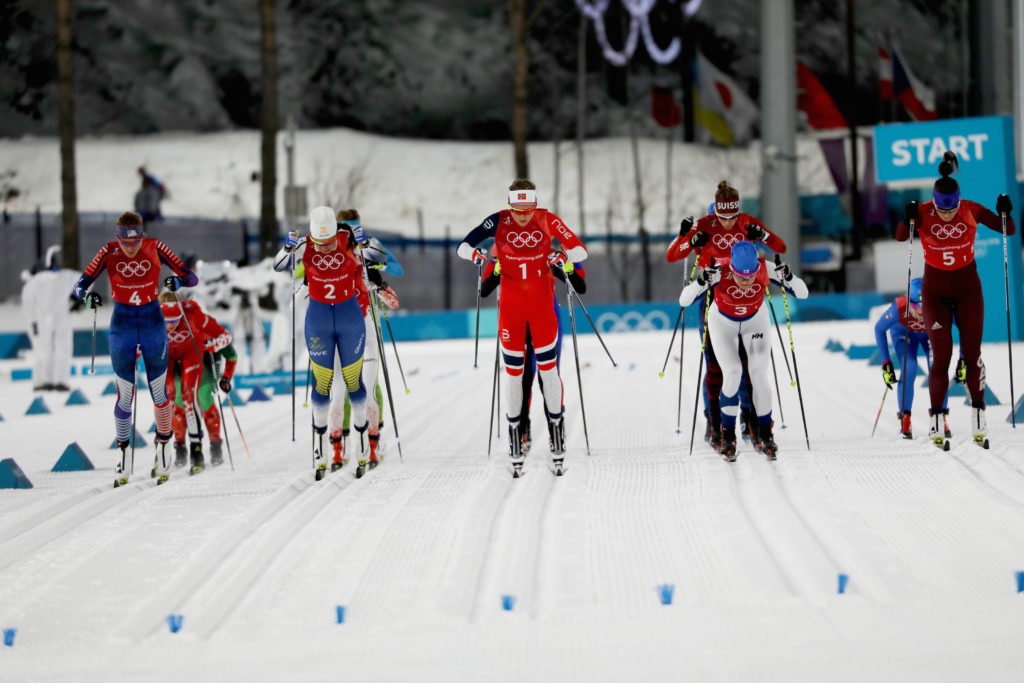 The race was out of reach early as the Russians, fielding a rather unknown squad given the IOC suspensions of many of their top athletes, pushed an astounding pace in the first two legs of the classic. (The relay consists of two classic laps and two skate.)

“Russia chose the strategy of two very hot classic legs,” U.S. women’s head coach Matt Whitcomb later tells me. “That is something we were hoping [wouldn’t] occur and it doesn’t always; in championship events [though], it tends to. I still feel we put together the very best team we had tonight.”

The Americans and Finns were quickly playing catch up. Sophie Caldwell, who went out first for the Americans, was more than a minute down when she tagged off to Sadie Bjornsen who would cross the start line in 10th place. 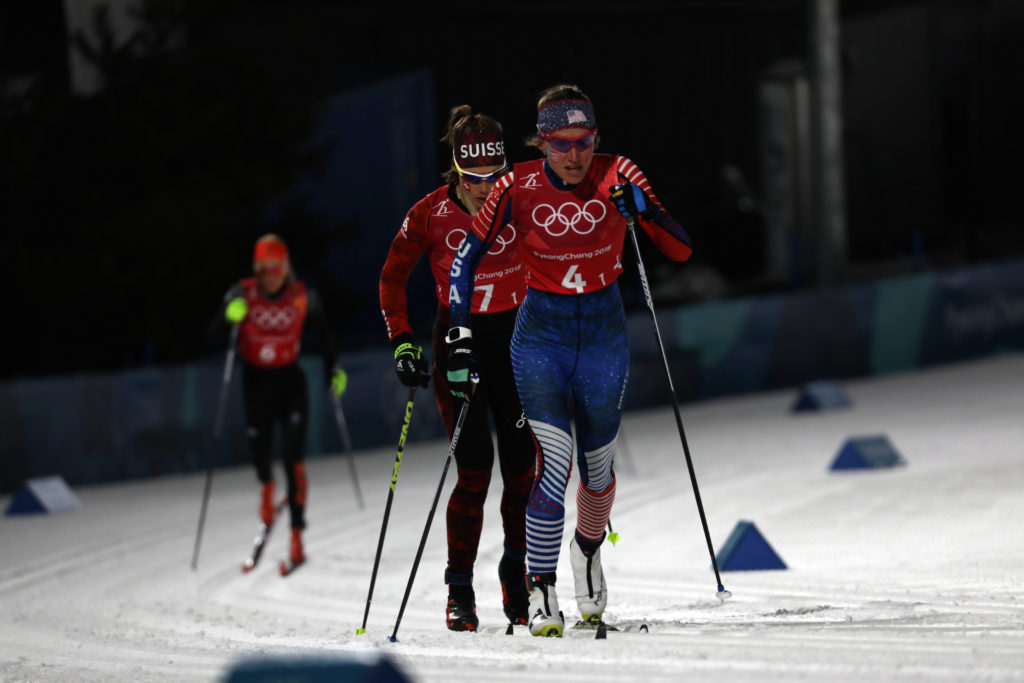 Caldwell and the rest of the American team held off a gritty effort from the Swiss throughout the race. Photo: Cody Downard

Bjornsen kept pace with the front runners and pulled back two spots before tagging off to the indomitable veteran Randall, who herself picked off another three spots setting Diggins up for her mad dash. Gold and silver were out of reach by then, but there was a glimmer of hope as the Russians were fading in the final skate leg—just not quickly enough. Team USA would finish 37 seconds off the podium behind them and Finland. 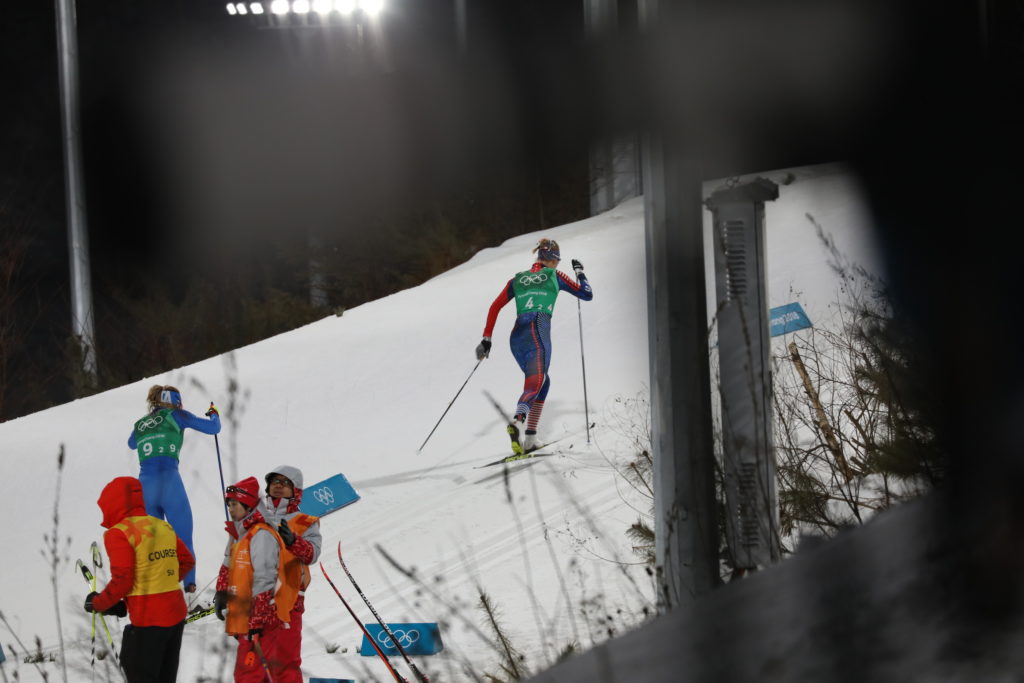 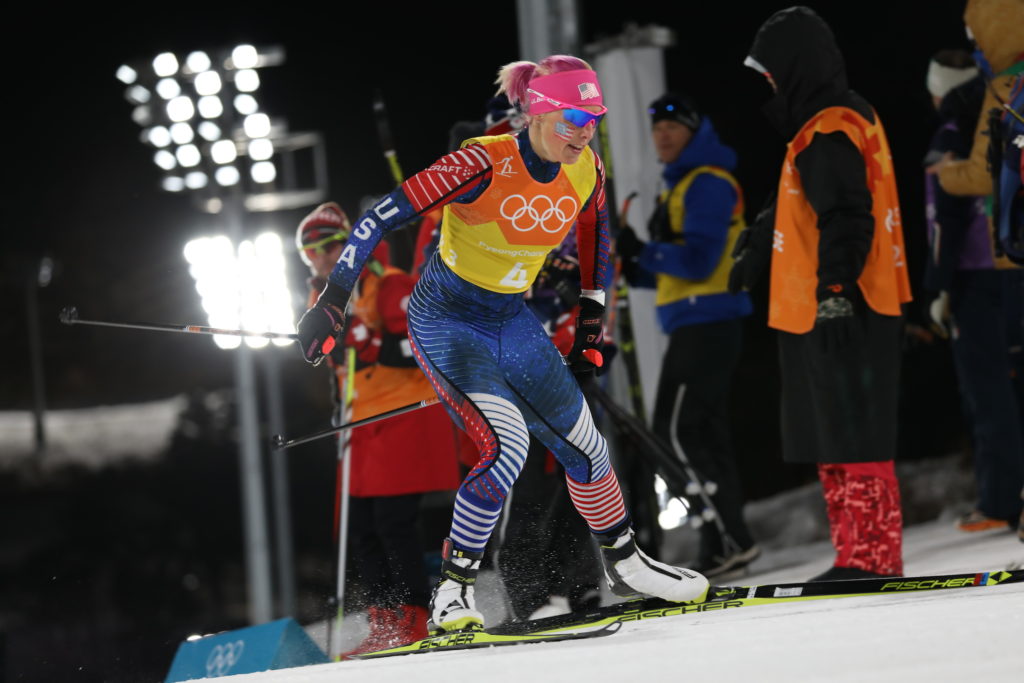 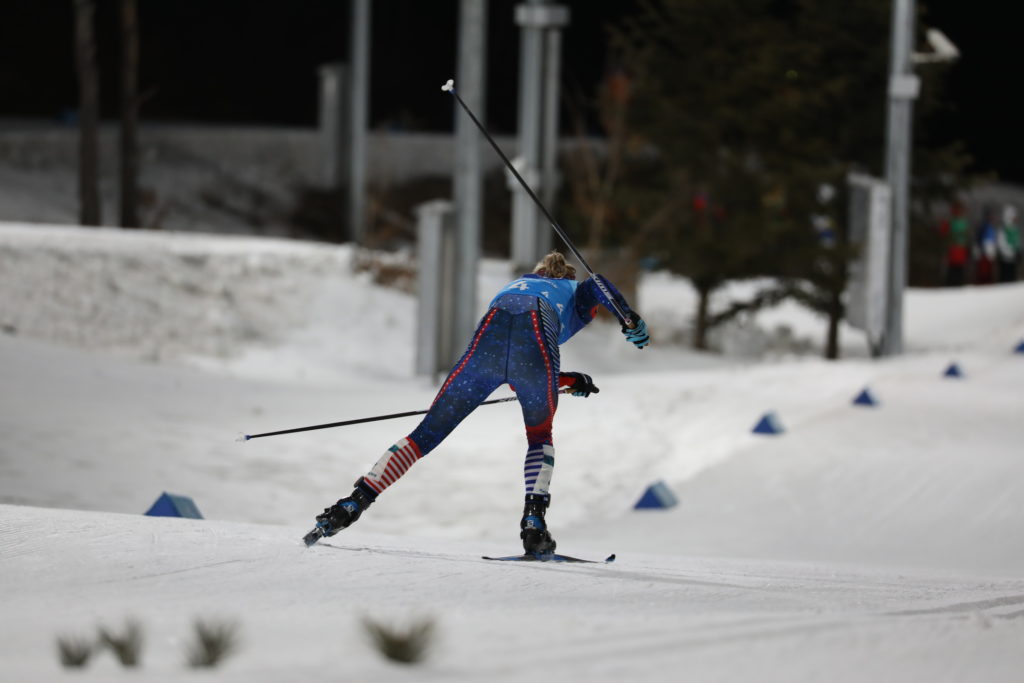 For the top three teams at the tonight’s race there is an elaborate press conference. The Americans and the remaining 10 teams have to endure the gauntlet that is called “The Mix.” Stage by scaffolded stage, the teams off the podium walk up through a chicane of hundreds of TV cameras, then radio, and last (and nearest to the beer tent) the writers from the ski media. 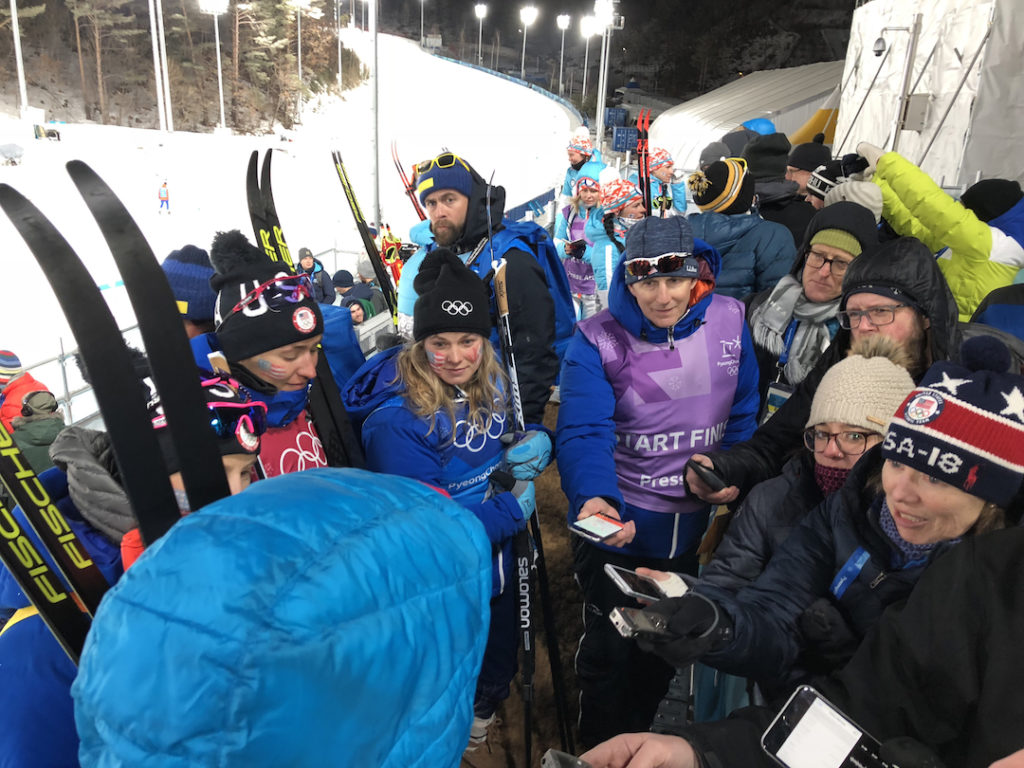 In the Mix: Diggins (center) and Caldwell take questions after the race. Photo: Doug Lewis

Bjornsen, a 28-year-old member of the squad is measured and thoughtful, clearly looking to the future. Caldwell is at a loss for words at this point, mustering only “I agree,” to one of Bjornsen’s lines. Diggins’ voice carries a tone of defiance; clearly tired of the arguably misplaced pressure put on them by the national media. But it’s Randall, who’s come back for her fifth Olympics after having a child after the Sochi Games (where the American relay team finished seventh), who’s the most reflective.

“We had to leave something for the next generation to go after,” she says. “This group has had a lot of firsts but there’s a really awesome young group of girls coming up with World Junior podiums in the relay so I think there’s high hopes and we hope we can leave a good path for them.”

“What opportunities do you think the next generation will have that you haven’t had?” I ask Randall. Caldwell, at this point is turning away to wipe away her tears. “I think we’ve figured out a lot about how to make this a lifestyle and how to make it sustainable. We’ve learned a lot about training. And most importantly, we’ve gained a lot of confidence. So, the world those girls are coming up through is a very different world than when I went to my first Olympics when we weren’t even sure we wanted to put a relay in because we knew we couldn’t be competitive. So, I think just the belief and the path and the right training and those girls are coming through just way ahead of where we started. And we’re going to have so much fun watching them.”

There’s a moment of silence among the ski writers. Some of them, now crying too, have watched these exceptional athletes come so close to a historic first women’s cross country medal yet again. Randall has just said it all without perhaps knowing how much she’s said. And Caldwell? She’s shattered, but one day, she’ll know how much she’s done.