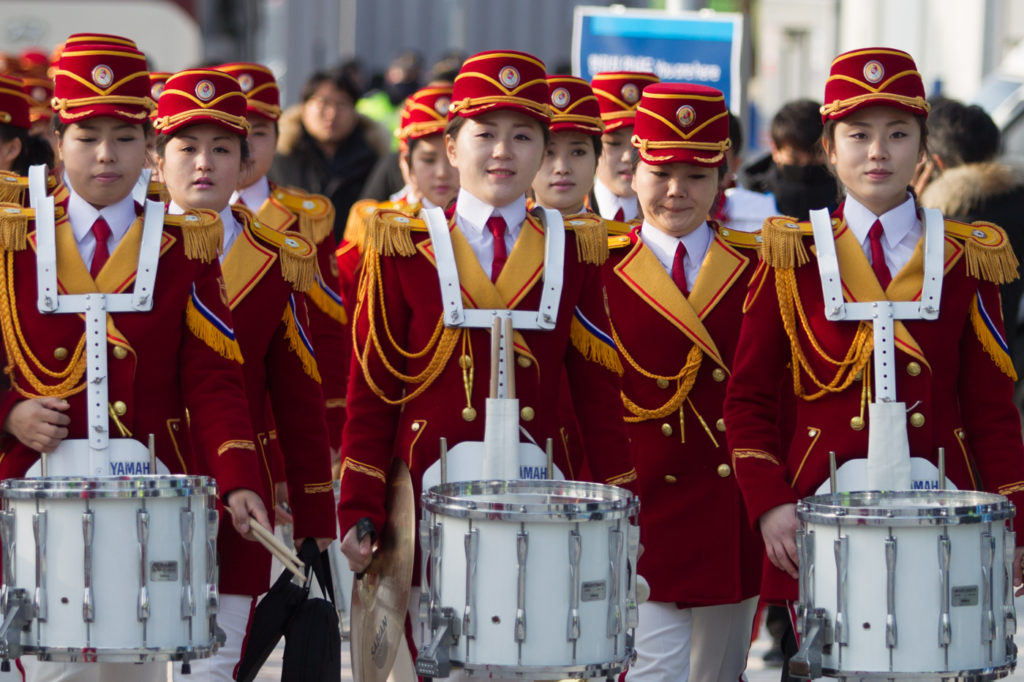 A drum-line member of North Korea’s marching band leads the way down a cleared street in PyeongChang. Photo: Cody Downard

The men’s Nordic combined or the mixed biathlon relay that I watched last night could have been contested anywhere in the world that has a jump, a range and a track. But Cross Country Skier photo editor Cody Downard and me came here, to PyeongChang, South Korea, to watch them in the midst of hundreds of other contests. And while we came for the sport, and have thus far been moved by it, it’s the little things, the human things, that you can only get when the Olympic Games brings it all together.

Here’s a list of three day’s worth of memorable observations.

Five friendly Siberians chatted up Cody and I the other day at the Paris Baguette Cafe in downtown PyeongChang. They’ve come on their own nickel to spread the word of Jesus, they said, and are sleeping with 70 others from around the world on the floor of a local Protestant church. One gave me a copy of the Lord’s Prayer in English. Another proffered a coin from Czarist times. They said they’re not Putin fans, instead in favor of hockey and Jesus. Given the doping scandal from Sochi and all their medaling—and the meddling in our election—it’s hard not to be suspicious of Russian motives on any front (especially after their surprise showing in the cross country relays). But you won’t meet an American here in any capacity who doesn’t have great suspicion of Russian athletes and how clean they are or aren’t. Call me a sinning cynic, but that’s sad when you want to believe.

Believers? Russians of any strip are viewed with a certain amount of suspicion after Sochi cheating. Photo: Courtesy Adam Howard

While the biathlon and some of the men’s downhill events have been busy—not 100-percent capacity but respectable—the merch store in the Olympic Village is the hands-down winner for traffic. Need some logoed chopsticks or a tea set? How about a stuffed white tiger for the kids? It’s almost as if many Koreans only get this far and not up to the hill: Got the T-shirt! 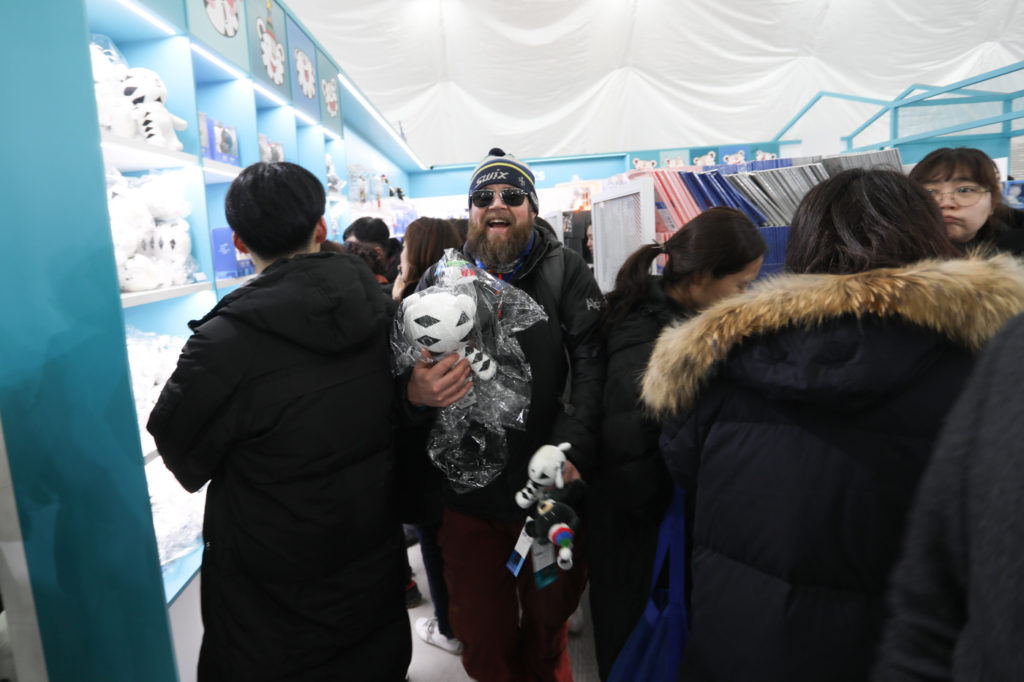 Adam Howard with his bounty of official merch from the Olympic Store. Photo: Cody Downard

On our walk back from the Olympic Village yesterday, we came upon an eerie scene: hundreds and hundreds of absolutely silent police making way for what a Korean-American said was a North Korean delegation. Sure enough, we rounded the corner and there’s an all-women, North Korean marching band. I can’t overstate how shocked all the South Koreans seemed—the silence and awe remained for minutes after these women had gone past and into the stadium. 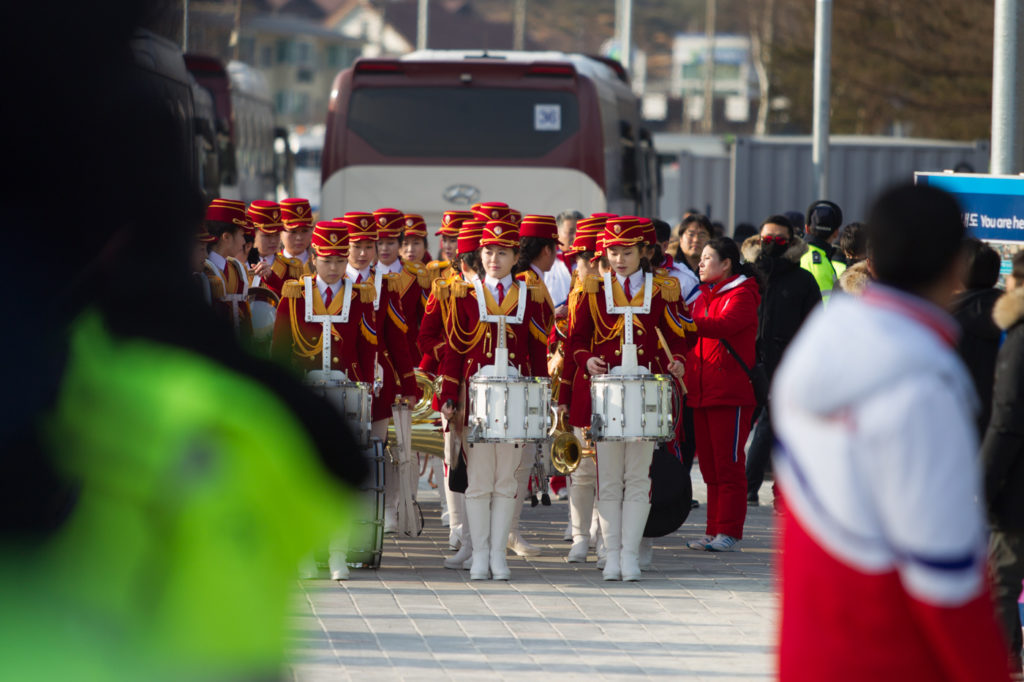 Forgive me, but I really didn’t care for longtime NBC Olympic host Bob Costas. I always felt he was kind of melodramatic. Mike Tirico is a welcome change, and with a smile like his, what’s not to like? I also think it’s great to have an African-American announcing what is a Caucasian-dominated Olympics. He was good enough to grab a photo with our cross country media delegation and was ever the politician, asking us where we’re from and what we’re covering.

Our Olympic budget was predicated on free food. At World Cup events, the feed is often fat, and Cody and I expected even more from the Olympics. But after a day, we were running on the only meal we could find: sugar cookies and green tea. “Are you kidding?” veteran cross country reporter Peggy Shin said when I asked if we might do better. “I call it the Olympic diet. I always lose three pounds coming out of the Games.” Thankfully, she was wrong. On day two I sniffed out the Olympic buffet, and it was everything Cody and I had dreamed of: a smorgasbord of world cuisine, from Cocoa Puffs to kimchi, sausage to conch porridge (with sesame oil, and soy sauce on the side). No maple syrup, pancakes or French toast, but an espresso machine and eggs to order. Salad, too, and breads of all colors.

Most of the big winter-sports nations have “houses” at the games. Some, like the Austrians, actually pack them up and move them around from Olympics to World Championships. We talked our way into the Austria House, which is just downhill from the Alpensia sliding, jumping and cross country and biathlon venues. Places like this are for big donors and corporate honchos, which means media need to be present to keep their excesses in check. Enter the Cross Country Skier delegation. Rather than pay the $300 (the going rate for public to enter the American House), we told them we were coming to Austria to cover next year’s World Championships in Seefeld. And while we got free Steiner and sausage out of the deal, and as the trombones and fiddles played, our next international junket was hatched.

Perhaps you’ve seen the throngs of young Koreans bedecked in red, pink and gray North Face outfits. Apparently there are 14,000 of them, and they are delightful and, in nearly every case, delighted to be here. If you’re lucky they’ll give you their patented double-hand wave as you walk away with completely inaccurate information on your way to get on the wrong bus. The best of them will hail you a taxi with KakaoTalk, a Korean mashup of Facebook Messenger and Uber.