This season FIS changed the World Cup schedule by eliminating 5km races for women, eliminating all relays and reducing the number of skiathlons and team sprints to one each. For the most part, these changes match the Olympic cross country schedule, which features a skiathlon and a team sprint but no 5km race for women or 10km race for men, the Olympics, however, will include a relay.

Last week we published an interview with U.S. Ski Team coach, Chris Grover, explaining his take on the World Cup schedule changes. But what about the athletes? The changes affect them most. Jessie Diggins would argue that these changes forget, or at least largely ignore, their interests. 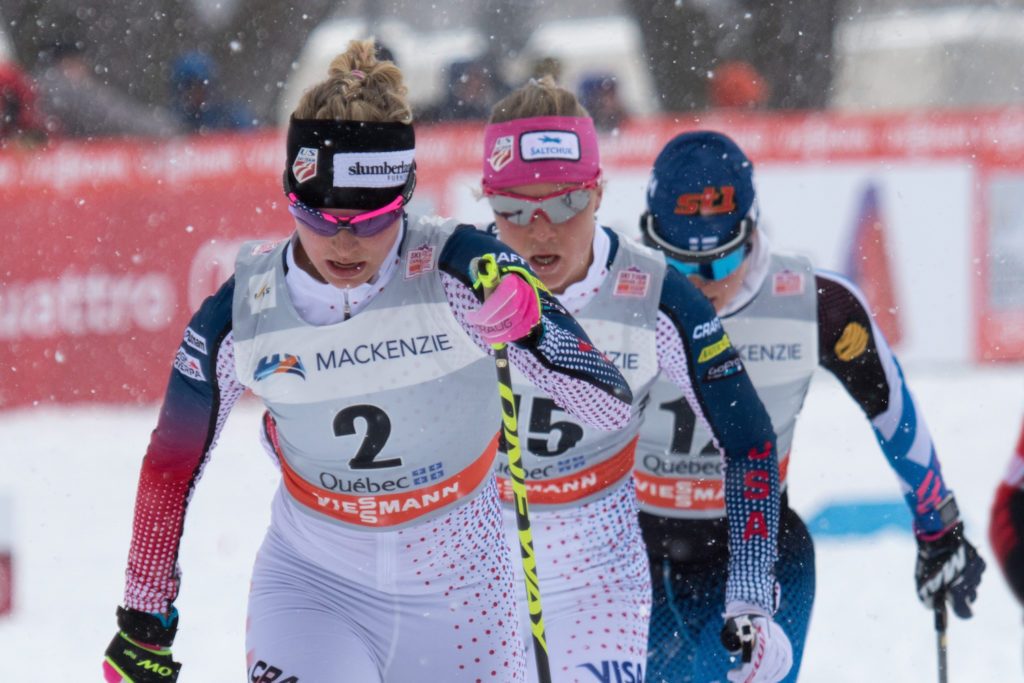 Cross Country Skier (XCS): First off, what do you feel this schedule change does for the overall feel and flow of the season?

Jessie Diggins (JD): In my opinion, the change takes a really dynamic and really diverse sport and turns it into one thing. It would be like making every movie genre ever and saying “now, we will only show romantic comedies. People like romantic comedies. That’s the only thing we’re ever going to show on TV.” We already only have six Olympic events, which I think is really interesting in a sport that has an infinite number of possibilities. We’re like swimming, or track and field, and we only get six and it changes every year so every eight years you get an Olympic 10km skate event. The 10km is only one event in the entire Games. How does any country pick their 4x5km relay team when there are no 5km races and no relays? How do you pick who starts the skiathlon, when you don’t get to race any of them? We do zero 30kms. How do you pick your 30/50km team? It’s super unfair. How do you pick the team sprint for the Olympics? The only team sprint is after the Tour de Ski while half of the team is either recovering and, or, sick. How do you justify selecting athletes who haven’t even raced a team sprint during the current season? You need more races!

XCS: Have you been given any explanation for the calendar changes from FIS? Was it brought up from athletes? Coaches? From FIS?

Jessie Diggins (JD): I think FIS wanted it. From what I understand, a lot of what we do is based on TV. It’s not based on what the athletes want; what might be better for the athletes, what might be better for the sport. It’s all based on TV. Which, I guess, you can understand. If nobody watches cross country skiing on TV then sponsors aren’t as psyched. Sponsors don’t give money and then we have no sport. So, FIS thinks people would be more interested in watching the sport if they see the same thing over and over again. They don’t care about the athletes. They care about TV.

XCS: What races are on the World Cup schedule this year?

XCS: Given that you’ve won the last three 5kms and Sadie has also been on the podium in a 5km distance event, do you think the changes have anything to do with U.S. dominance in that event?

JD: No. [laughing] I don’t think FIS even knows who I am or cares enough to be like “oh, we’re really going to screw over this little blond Minnesota girl.” I’ve had so many people from many different countries come up to me and say how it’s so good for the sport that you were on the podium because it’s a new face, it’s somebody else, it’s exciting because when there’s a 5km skate they know that someone from a country that typically doesn’t win has a shot…. In the skiathlon you’ve got Nathalie von Siebenthal; you’ve got Krista Parmakoski, you’ve got people who are not the normal people always on the top who are doing really well in some races that are maybe a little different.

XCS: What impact do you think this schedule has on the athletes?

JD: I think it will take some of the excitement out of the sport, sadly, because I find myself really looking forward to the different events. Instead you’re like “cool I’m going to go do a sprint and a 10km…for the eighth weekend in a row….” Even Norway gets bored of watching it.

XCS: Do you think the upside could be the opportunity to get really good at 10kms?

JD: I hope anyway, that if there’s no way to change it*, that something positive comes out of it and we find that other countries can be good at 10kms and you find more people on the podium because they start getting gutsy. We’ll have the chance to try totally different strategies since we have so many 10kms. Hopefully something good comes out of it.

XCS: If you had the opportunity to give a statement to FIS about the current World Cup schedule what would you say?

JD: I would say that I think having a variety of events, including all of the Olympics events during the World Cup calendar season is important so that athletes get the chance to race different lengths and types of events. [This also] keep[s] it exciting for viewers so that they see every aspect of our sport and not just the one narrow lens that they are currently going to be viewing it through. I think we have the same goal: FIS wants to increase TV viewership for sponsors and we do too! But I think that’s not by cutting out all of our events. I think you increase the viewership by having extremely dynamic announcers and by having really exciting events and playing it up. Pull funny things from athlete’s social media so they feel like they know the people racing. I think there are really creative ways, using already exciting material that athletes would totally agree to if it meant that we could keep all of our events. I think FIS is taking the easy way out and I think there are other ways to accomplish the same goal without just cutting out events.

*Chris Grover has encouraged his athletes to reach out to the FIS athlete representatives to share their ideas and opinions. He maintains that the schedule is not “set in stone” and could easily change in future seasons depending on the response and viewership numbers from this year as well as feedback from the athletes and World Cup teams.

Stay tuned to see how this new schedule treats Jessie and the U.S. team. Their season starts Friday, November 24th in Ruka, Finland.