The Heart of the American Birkebeiner 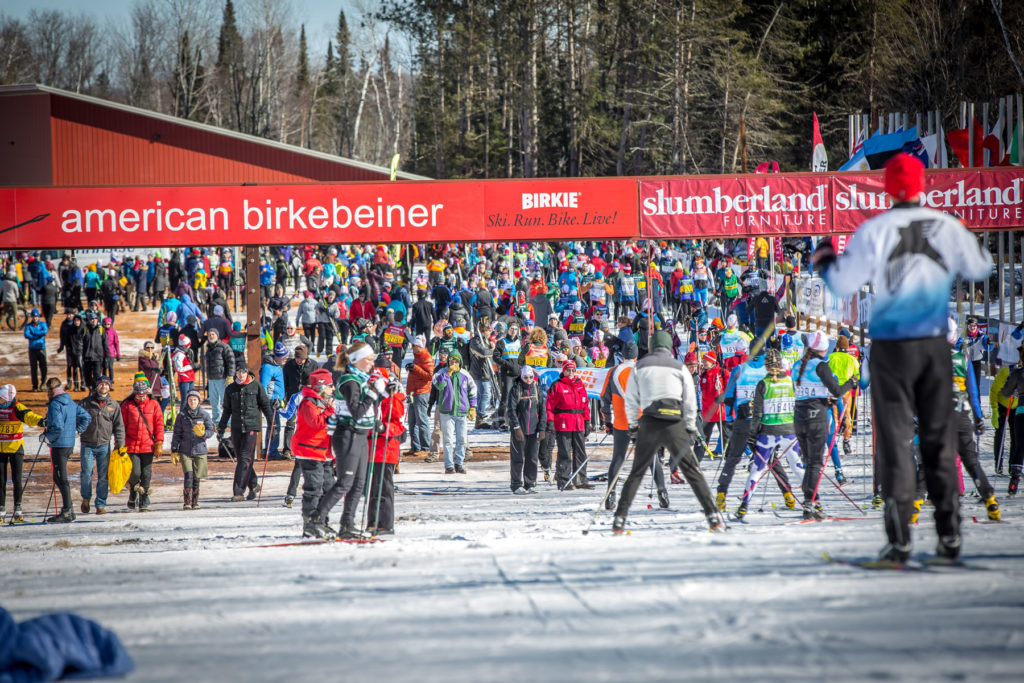 Writing a blog about skiing without snow (or any skiing to speak of) can be pretty deflating. After racing the Boulder Mountain Tour in early February, I joined my team in the Midwest for SuperTour races in Ishpeming, MI followed by the American Birkebeiner in Cable, WI. Rain welcomed our arrival along with temperatures in the low 60s. I had plenty of time to write a blog, but felt somewhat uninspired as I watched the snow disappear outside our door. My optimism waned as the temperature waxed, but my concerns were a light drizzle compared to the logistical hurricane faced by the race event team and Executive Director, Ben Popp.

Ben Popp is the organizational powerhouse behind the American Birkebeiner, a 51 km point-to-point race set in Cable, WI and the biggest ski race in North America. The event draws over 10,000 eager competitors and another 25,000 spectators, volunteers, and industry professionals to central Wisconsin for a week of racing and festivities culminating in the signature marathon event. In this part of the world, winning the American Birkebeiner (or Birkie) is on par with winning an Olympic medal. Past champions become local heroes, legends even. The prize for winning is $10,000 plus an enviable Slumberland Mattress. This year marked the 44th iteration of the annual race and I, along with thousands of others, held high hopes for the event. Looking back, Popp said, “I really believed, in my hearts of hearts, we were going to be able to have some sort of race.” 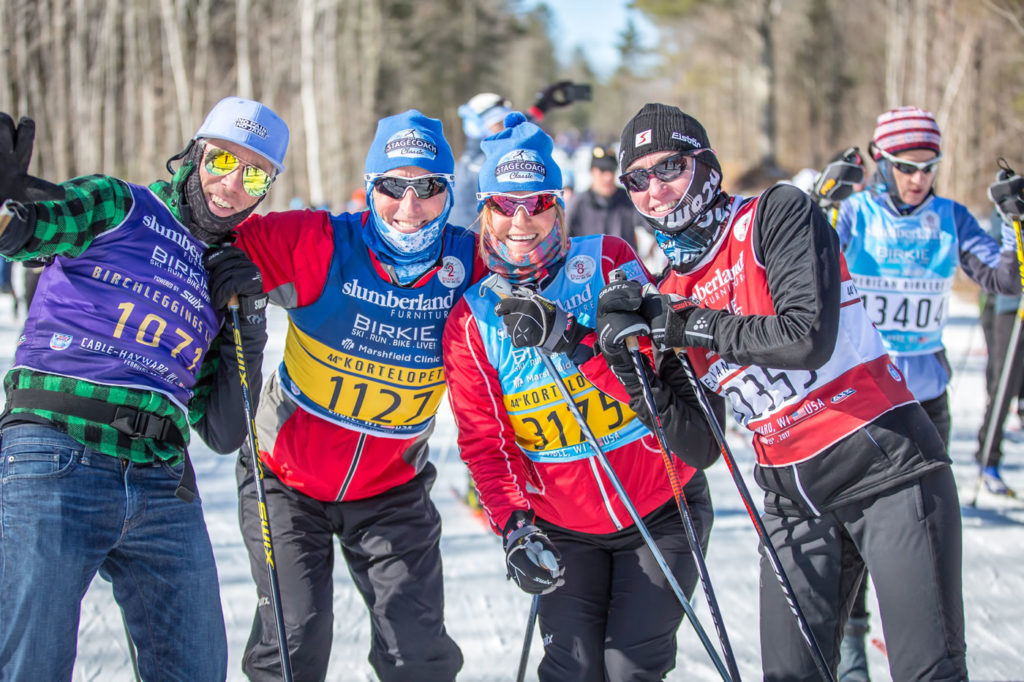 Many Birkie fans made the most of imperfect conditions and strapped on the skinny skis for a few laps of the 5km loop at Birkie Fest. [Photo] Courtesy of ©American Birkebeiner Ski Foundation

Unseasonable warm weather and a lack of snow in Wisconsin didn’t just threaten the Birkie, it threatened an entire week of racing and community-based events associated with the marathon. With each day, disappearing snow forced changes in the plan: first, the cancellation of the Elite Sprints and Opening Ceremonies, then the shortening of the race course and the addition of a running race in place of the Junior Birkie and Barnebirkie (ski tour for kids ages 3-13). For Popp, the youth ski events are some of the most important to the Foundation’s mission. “If we’re going to be an integral part of growing this sport, the kids have to have a great experience,” he says. And so the inaugural Junior and Barnebirkie running races were born. My team joined the festivities to cheer on the enthusiastic crowd of young skiers. Undeterred by the lack of snow, the kids laced up their running shoes and took to the start line. We helped lead warm-ups and then tried to keep pace as the young athletes sped around bright orange cones placed along a brown field, plowing through the mud and grass. We weren’t skiing that day, but if I closed my eyes and listened to the excited chatter around us, I could almost imagine that we were. Plus the kids made us feel like total celebrities.

“The kids really loved having the athletes there,” Popp would tell me later. “You hear about role models, and man they thought it was really cool seeing that there’s really these professional skiers. To see a real life breathing human that really [do ski professionally] is like pretty exciting (laughing).” 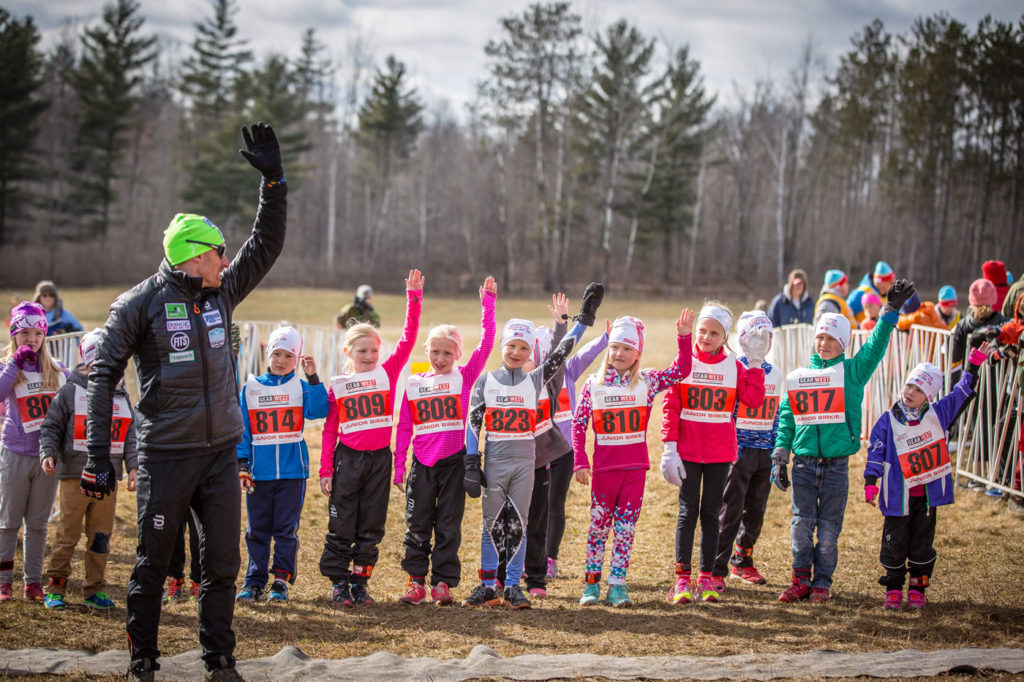 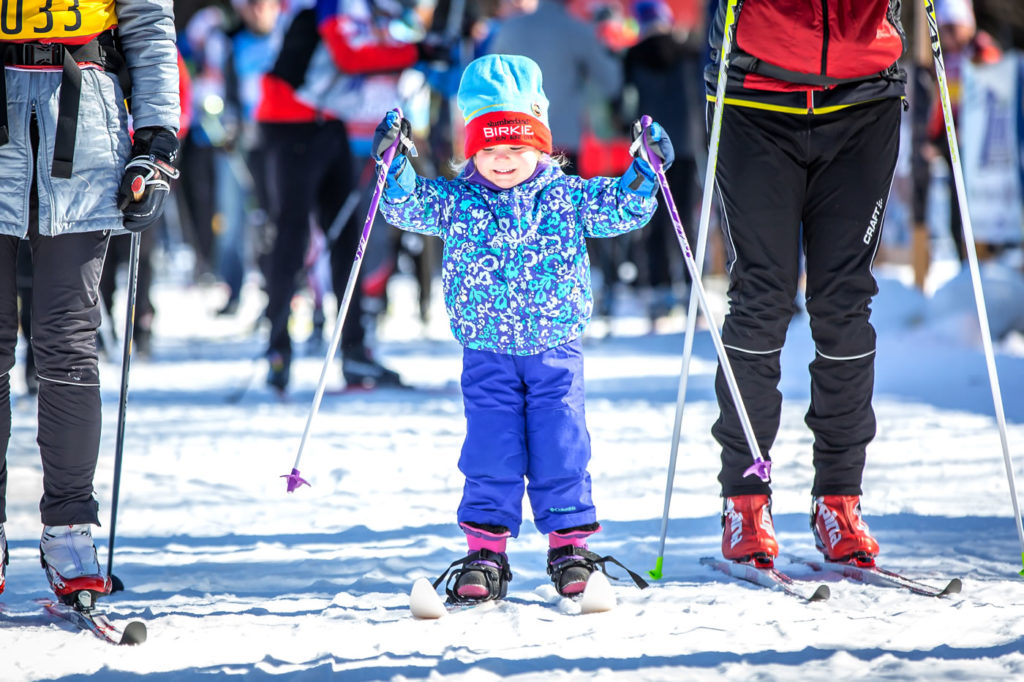 I imagine it is like seeing a dinosaur. You aren’t totally sure they exist (people actually ski uphill for a living?) and then you meet one and realize wow that’s crazy and maybe (hopefully) also a little bit cool. Perhaps it inspires them to be dinosaur too one day.

By mid-week, Ben Popp, delivered his daily trail report in a bright orange lifejacket while standing alongside the final stretch of the racecourse, a swimming pool that used to resemble frozen Lake Hayward. Popp grew up in the Cable/Hayward area, participating in his first Birkie at age 18. He’s since completed the race 16 or 17 times and joined the organizing team in 2013. With 11 full-time staff members and upwards of 2,000 volunteers, the Birkebeiner Foundation is comprised of a powerful group of committed, smart and passionate individuals who work year round to pull-off one of the greatest sporting events in America (or at least in Nordic skiing). They order enough bananas and Nuun to feed 10,000 hungry (and at times hangry) racers, organize the delivery and maintenance of hundreds of porta-potties, manage race packets, hats, bibs and registration, not to mention vendors, bus shuttles, road safety, feed stations, grooming, lost spectators, and high-maintenance elite wave racers (just kidding). Despite their well-stocked wax box of tricks and talents, controlling the weather isn’t included. 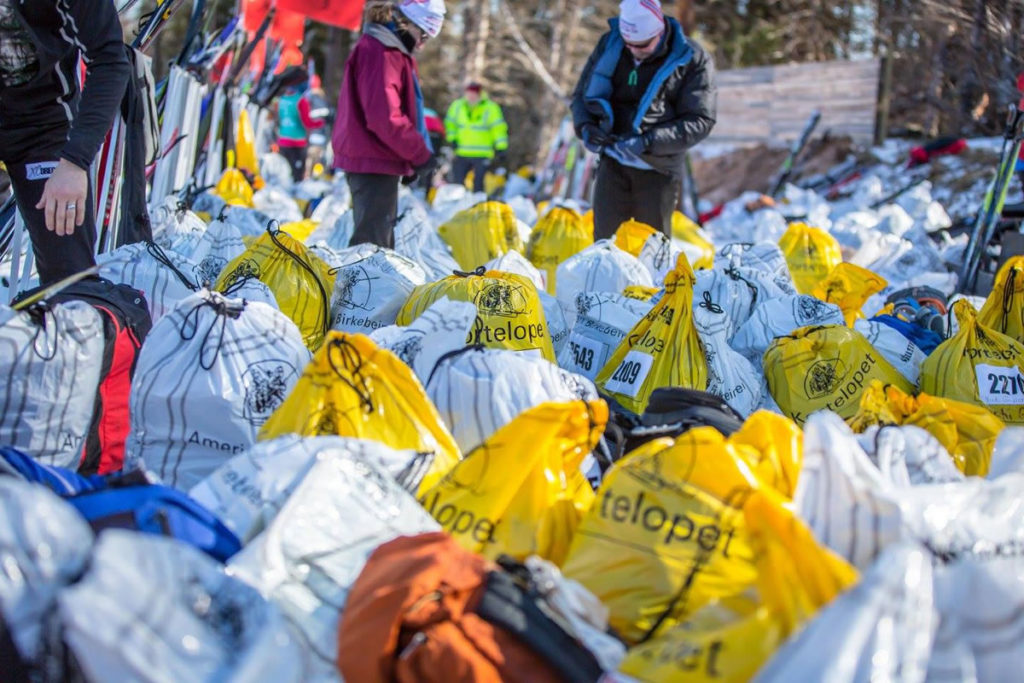 Just a small piece of the logistical puzzle that comes along with a 10,000 people at a ski race. [Photo] Courtesy of ©American Birkebeiner Ski Foundation 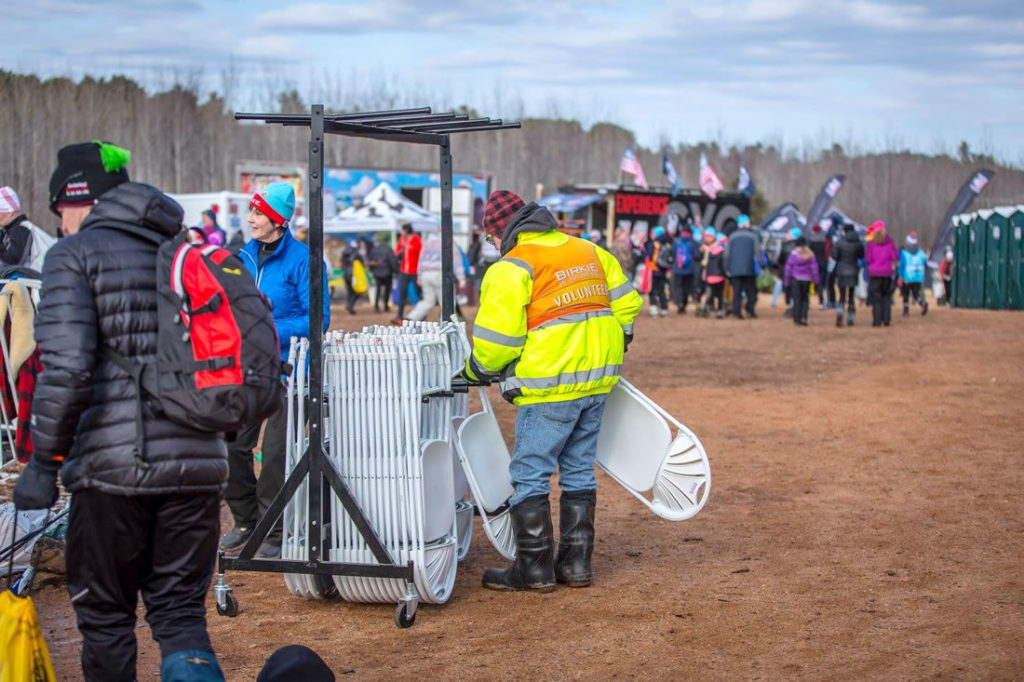 Watching in desperation as a late week snowstorm passed 100 miles south of Cable, Popp issued his final dispatch Friday morning, “After days of record-breaking, unseasonable weather, over 1.5 inches of rain, and a predicted snow storm front that missed the Hayward and Cable areas, the American Birkebeiner Ski Foundation regretfully announces the cancellation of the 2017 American Birkebeiner, Kortelopet, and Prince Haakon cross-country ski races.”

In place of Saturday’s race, the Birkie team staged the inaugural Birkie Fest complete with 5km of skiing, live music, food and libations. The Nordic community came out in full force with an estimated 6,000 skiers participating. “For all the volunteers, and a lot of the staff, that had put all those hours in, ya know, I think they really felt that their work was worthwhile, felt validated, and that they didn’t waste their time,” Popp said. “All those people came out and did a lap and did a shot ski and got a bratwurst and listened to music…We always talk about what can we do to give to the ski community and in this case, it was pretty awesome they really, in a way gave back to the whole foundation by coming back and enjoying and being a part of what was there.” 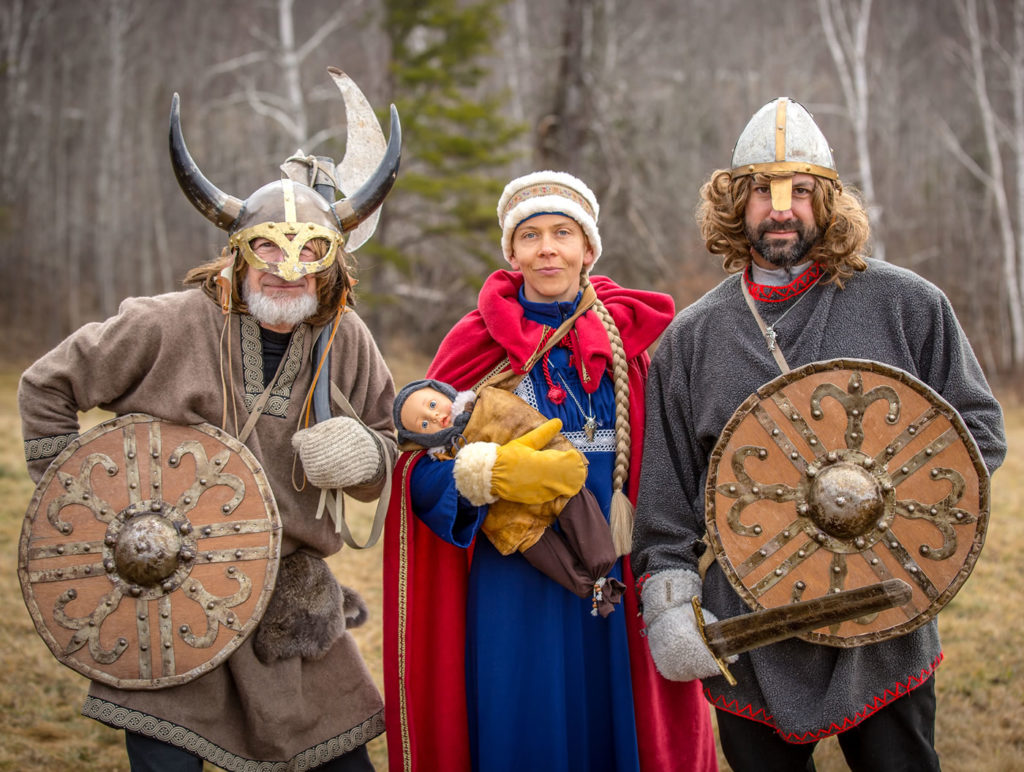 Getting into the spirit at Birkie Fest 2017. [Photo] Courtesy of ©American Birkebeiner Ski Foundation 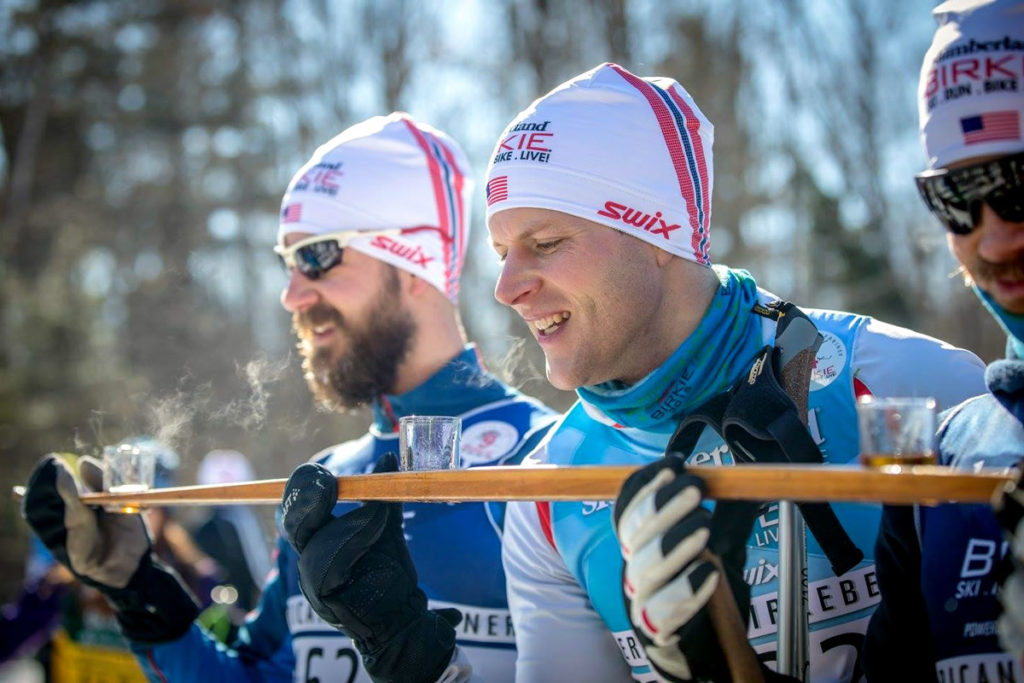 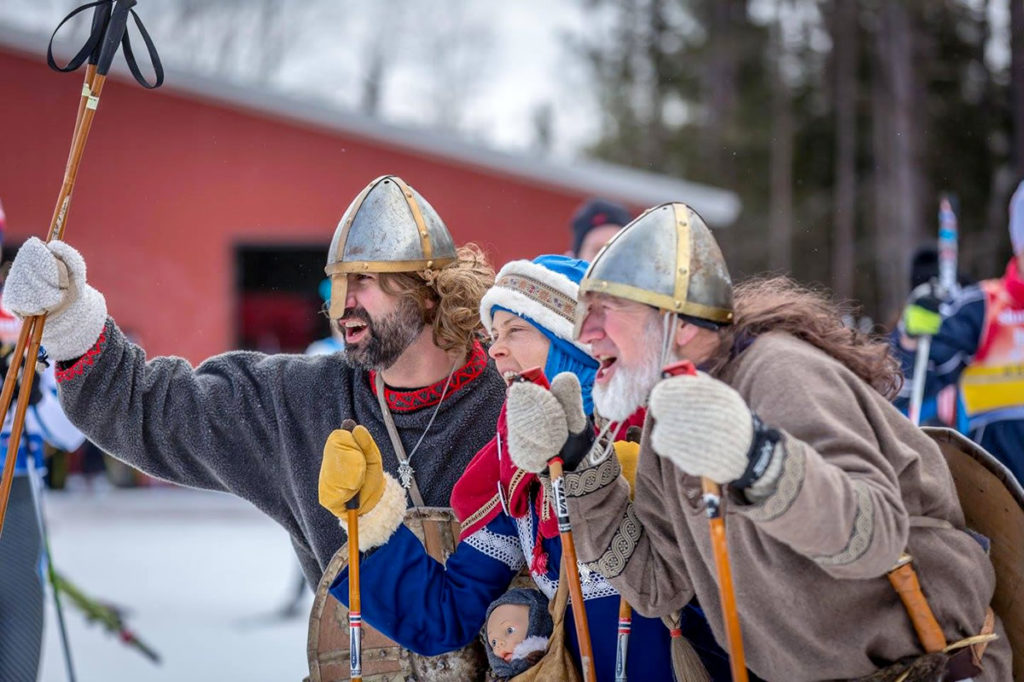 Some people even managed to complete the entire Birkie course on Saturday. A few ran the course on foot and rumors swirled of one guy who actually swam across Lake Hayward in a wetsuit to complete an unmodified American Birkebeiner course. Most racers came out to enjoy ample sunshine and ski a few laps on a 5km loop hauled out to the new Birkie start area by a fleet of trucks just 12 hours earlier.

“People want to support this sport and this community that we really love,” Popp added, once an elite racer himself when SkinnySki.com had a team. “Heck it doesn’t hurt that, you know, the more events, great results both nationally and internationally I think that just comes full circle. We’ll be all awake at 6:30 tomorrow morning to watch [World Championships in Lahti, Finland]. You know it just kind of continues to grow and build that culture. That is pretty awesome.” 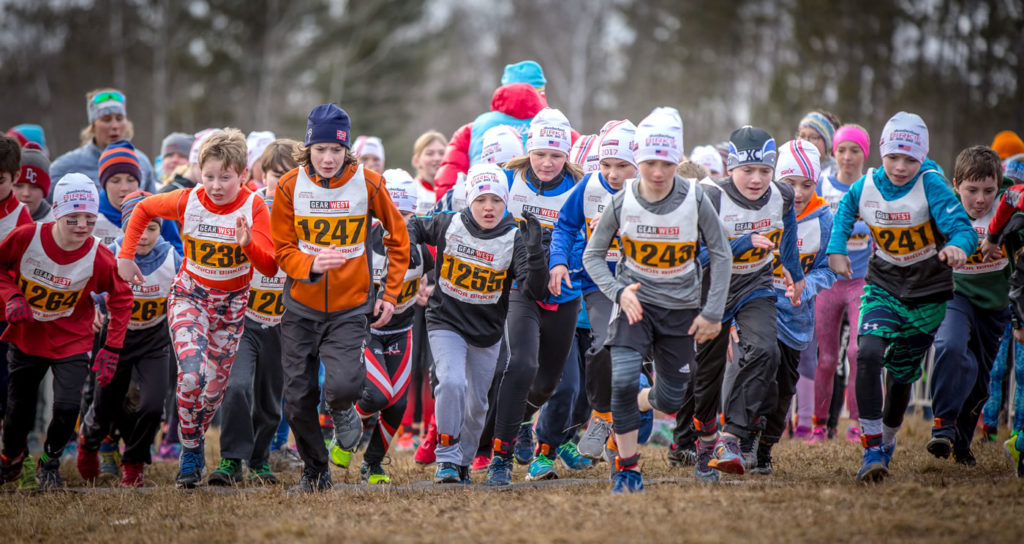 And they’re off!. [Photo] Courtesy of ©American Birkebeiner Ski Foundation

Although the skiers on the World Cup may be thousands of miles away, their connection to this event is undeniable. Without a race, the Foundation still spent 96% of their total budget with just the winner’s purse remaining, money the foundation hopes to invest back in the community. Popp hopes to help distribute the funds through the National Nordic Foundation. “That money is designated for the developing athletes and the athletes that are doing it for a living and I think most importantly it’s part of our sport development,” he says. “It’s the role models, it’s the people that my kids look up to that now we have, we have this group that for so long we didn’t and so you know as a little way that we have this money to donate.”

As a full-time skier I’ve found it can be all too easy to get caught up in the tiny world that is training, eating and racing. When one of those pieces is missing, perspective is hard to come by. I am a little disappointed (and honestly embarrassed) to report that I left the Cable area before Birkie Fest. Determined to get back to snow as soon as possible I traveled to the East Coast early Saturday morning. I missed Birkie Fest, but I left with a much richer appreciation for the people who make these events possible. At the end of the day, the actual racing is but a tiny flake, one that melts far more quickly than the pile of passionate people behind the scenes who make this sport sustainable and successful even when facing the uphill battle against a warming climate. That is the same energy that allows me to pursue ski racing full-time and that allows Jessie Diggins or Sadie Bjornsen to stand on a World Championships podium. I know one thing is for sure, I will never complain about too much snow again.

And in the words of Rogan Brown, a fellow elite ski racer for Sun Valley, #BenPoppforPrez! 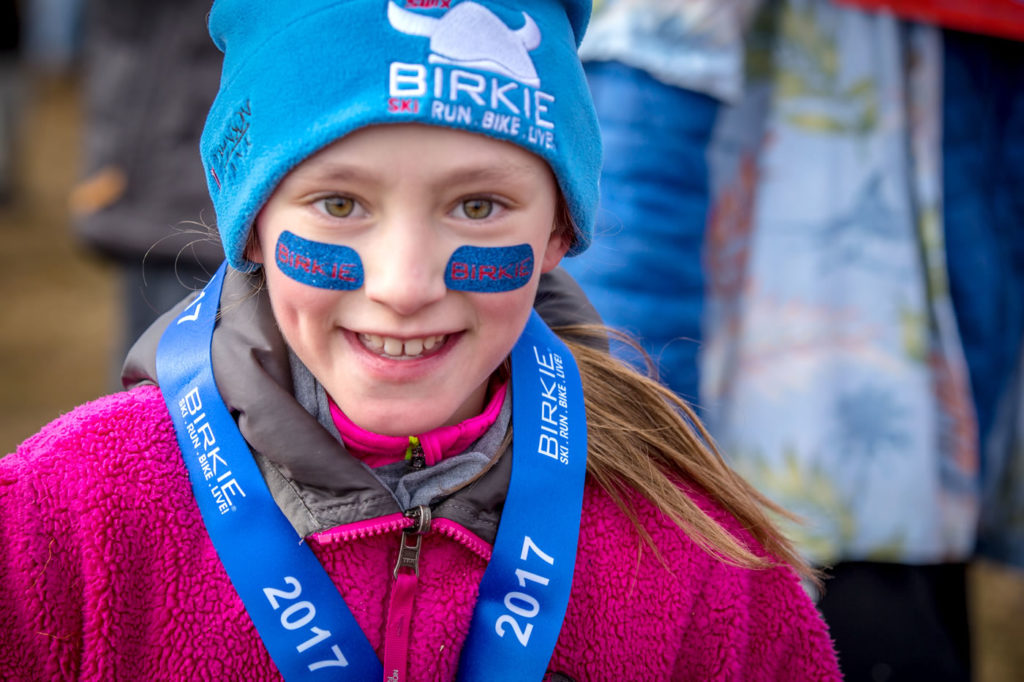 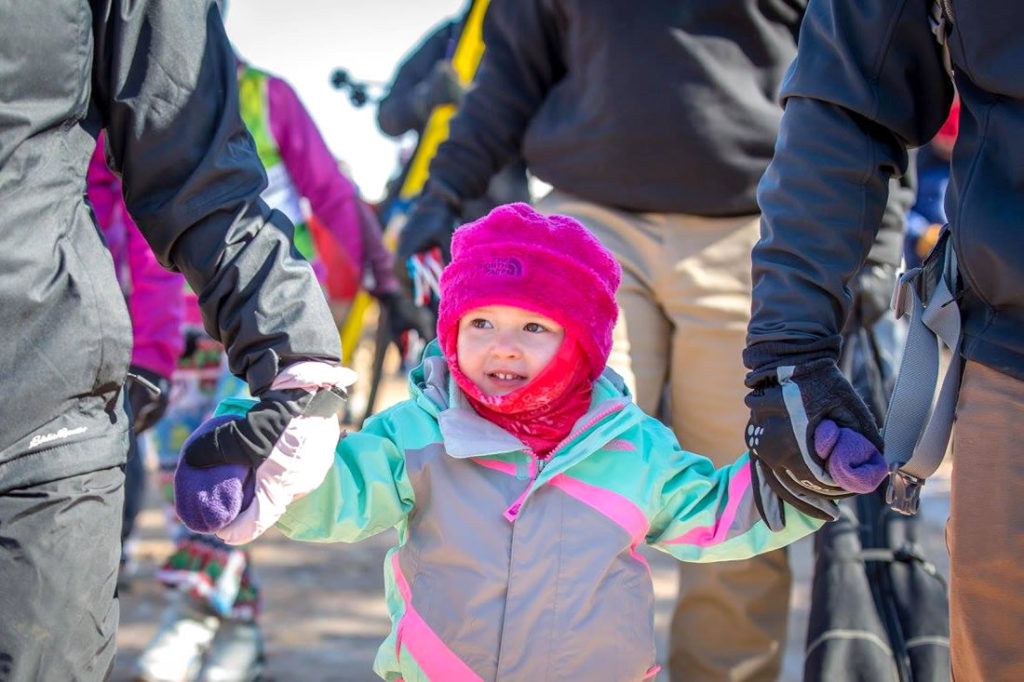