From Koch to Kikkan: Gold Medal sprint team takes on torch from legend

In Jessie Diggins’s bedroom in Afton, Minnesota, there’s a poster of Bill Koch. In it the 1976 Olympic silver medalist in the 30km is sand skiing against a backdrop of white Hawaiian surf crashing at his feet. Koch was famous enough then, and cross country skiing was big enough in the U.S., that he could, well, play against type: Not every image of him had to be an endorsement of some ski industry sponsor.

But it was the man and not, perhaps, the method that inspired a young Diggins to steal her mother Deb’s poster. And until Wednesday, February 21, 2018 at around 7:20 p.m. Korea time, he was still the most famous American cross country skier ever. Now that honor goes to Diggins and teammate Kikkan Randall after they won gold in the women’s free technique team sprint in PyeongChang.

Unlike in Saturday’s highly anticipated 4x5km women’s relay, the Americans had a legitimate shot at a medal Wednesday night. Any color would do, given that the women’s team had never medaled at the Olympics.

Diggins was locked in as the anchor leg of the team sprint, but coaches made the relatively surprising move in naming five-time Olympian Randall to the team over a red-hot Sadie Bjornsen. Either way, it was the right call: Randall had been lights out in her skate leg of Saturday’s relay, clocking some of the fastest splits of anyone in the race. And Bjornsen’s graciousness about the selection spoke loudly about her values and the culture of this team. 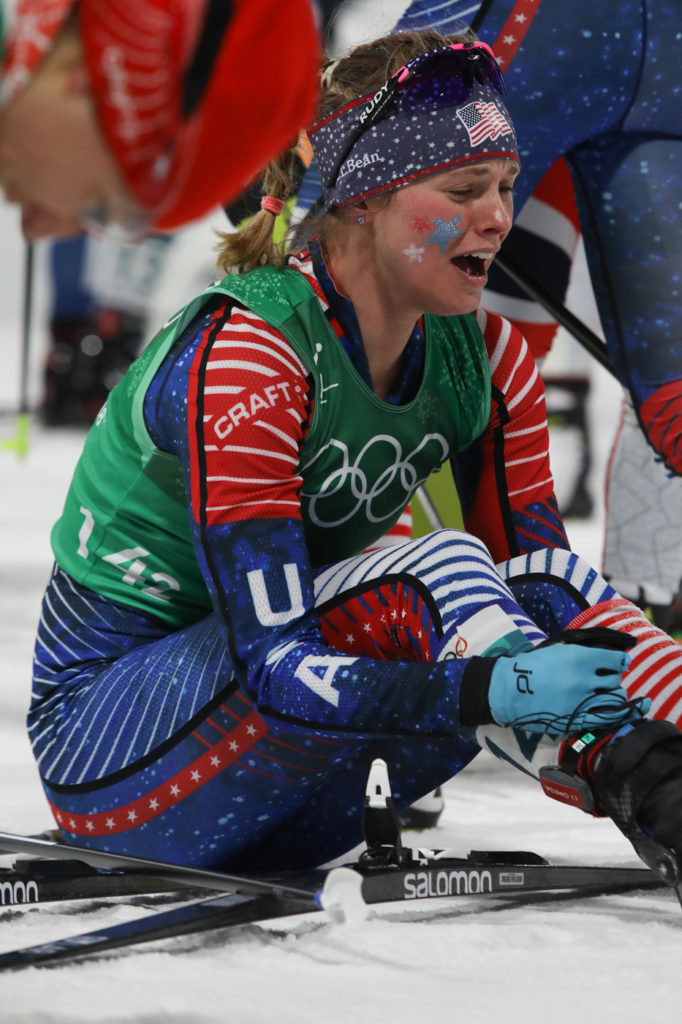 Tears of joy: The reality of what’s been accomplished begins, perhaps, to set in yet for Diggins. Photo: Cody Downard

Cross Country Skier photo editor Cody Downard and I were late to the sprint race and, as such, he lost the opportunity to get an on-course credential for the race. He’d have to settle for standing at the finish line. And, as Diggins rounded the corner picking up the pace against Sweden’s Stina Nilsson his shutter must have been, I thought as I watched from the top of the Mixed Zone, matching Diggins’s heart rate. The photos say it all. We were glad to have missed the bus. But, we couldn’t miss the next one that would bring us back to Seoul and our pushed-back flight to Seattle the next day. We’d have to miss the gold medal press conference, and a talk with the champs would have to wait.

But I did get to interview Diggins’s family and the men’s team sprint pair, Simi Hamilton and Erik Bjornsen, who finished a historic 6th in their own race. Their result would match the 6th place 4x10km relay result of Koch and crew from 1976, as the best ever for an American men’s relay team. And what they said backs up what I’ve learned about these men and women and their support systems here in Korea: It’s every bit as much a family as it is a team.

“They’re just such a strong team,” Diggins’s younger sister Mackenzie said of the women’s team after the race. “They’re all really good friends, and they all really support each other. There’s no cat fights or anything like that.”

“Honestly, her coaches and teammates deserve a ton of credit,” Deb Diggins added. “Jessie’d be the first to say, when one person crosses the finish line there’s a whole boatload of people behind.”

The women and men both looked poised and confident in their semifinal heats, each placing at or near the top. For the women to medal in the final, according to Jessie’s father Clay, it would be all about Randall, who would go out first, hanging on to the Swedish and Norwegian stars on the hill here at the Alpsensia venue that’s been dubbed “The Wall.”

“For Kikkan to go up that hill when Marit Bjørgen (Norway) charged and stay right there and put Jessie in position,” Clay said, was huge. “And Jessie has great downhill ability, so when she split [Norway’s Maiken Caspersen] Falla and Stina [Nilsson of Sweden], and of course she and Stina had been back and forth, so when she took her on a fair-and-square sprint out, we loved that. For her to do that is a dream come true.” 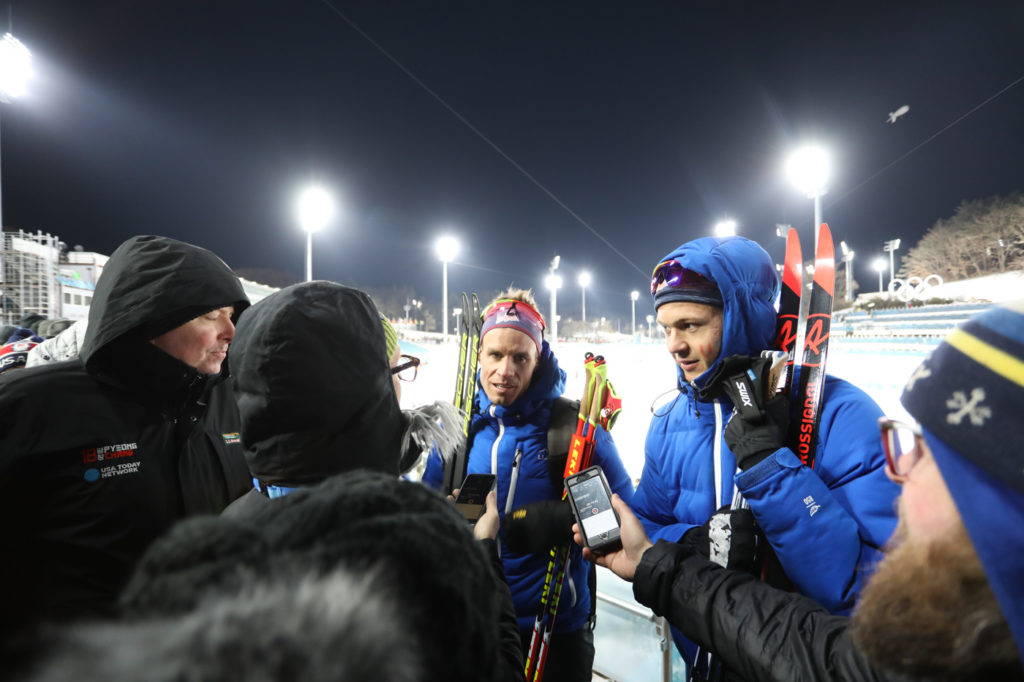 The women’s gold had an impact on the men’s race, too, though luck didn’t break their way, as Erik Bjornsen got tangled in a tight pack and went down, losing valuable seconds in the second lap. “I saw that they took the win when I was running to the start,” he said. “And that’s definitely a little bit of a boost. It’s an inspiration for us. We were ready to match them.”

Bjornsen’s teammate, Simi Hamilton, agreed. “It’s incredible. It’s a testament to what this whole team has done in the last 10 years,” he said. “I think if you asked Jessie and Kikkan, they’d be the first ones to say that they don’t deserve all the credit. I think it is a collective team energy that we’ve got right now that got them there. It speaks to how hard the women’s team works, the men’s team works, the coaching staff works, the waxing staff works. It’s awesome to be a part of that. We’re incredibly proud of them.”

“We’ll be back for a gold,” Bjornsen added with a laugh. “Eight years, 12 years from now,” Hamilton joked, seeming to tip the hat to Randall for how it took five Olympics and 16 years for her to get her gold. Hopefully Nordic Nation won’t have to wait 42 years again. 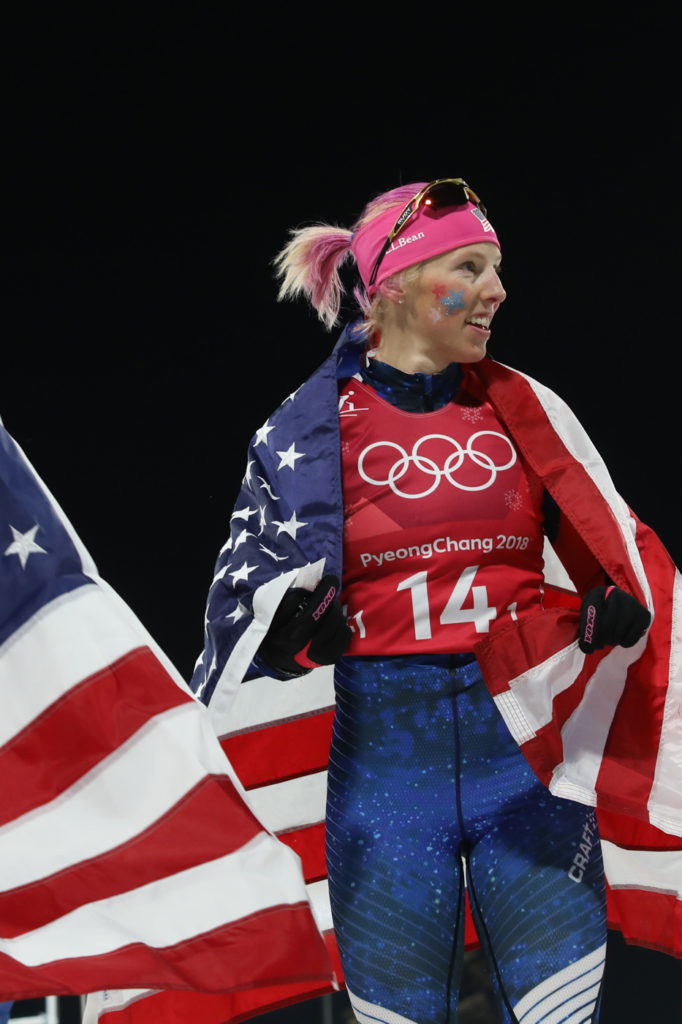 After 16 years as an Olympian, In her fifth Olympic Games, Kikkan Randall is bringing home Gold. Photo: Cody Downard

“One of the biggest thrills for [Jessie], as well as us, is the visibility this will give to cross country skiing in the U.S.,” Deb Diggins said. “That was probably their biggest goal, more so than their personal gold medal is that this is going to give cross country skiing and enormous boost.”

“This will really be a game changer in the United States for skiing,” Clay added. “For Norway it would be another medal. And look at them and the support they have. In America, now this changes everything.”

Only one person knows the potential impact of such change—Bill Koch himself. When Cody and I touched down in Seattle, I knew, as Diggins’ family knew and Kikkan’s teammates knew, that this story is in some part Koch’s story. 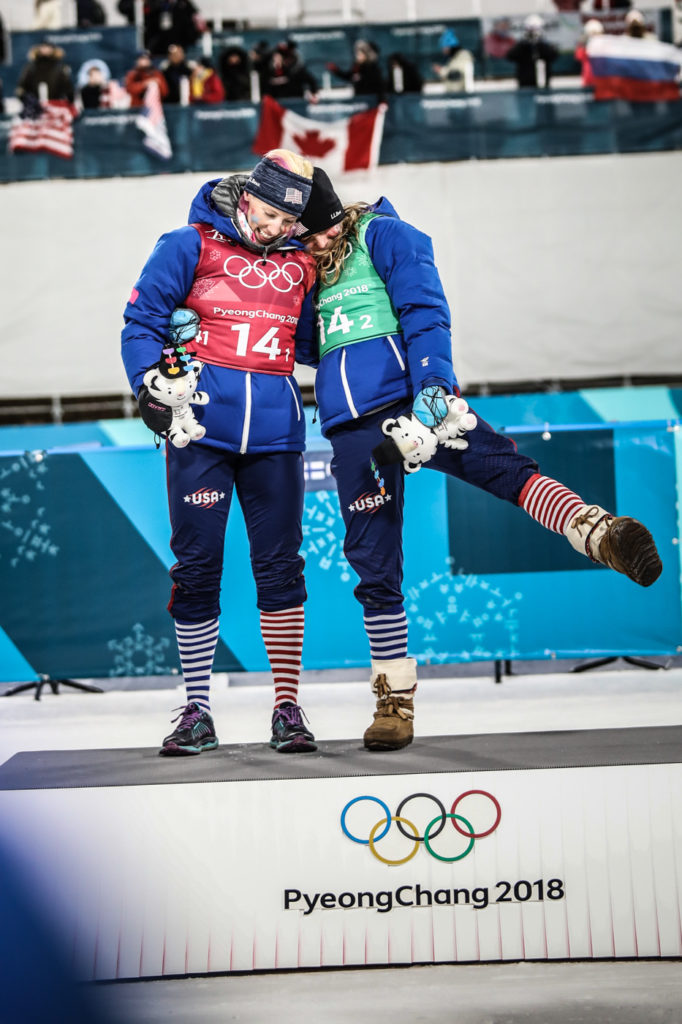 The top step: Diggins and Randall join Koch as the only Americans to win an Olympic medal. Photo: Cody Downard

He doesn’t have television in his Peru, Vermont, home. But he was watching both women’s and men’s sprint races on live timing. His imagination did the rest and his heart took it from there.

“I’ve been walking on air ever since,” Koch said over Facetime. “I’m so ready to pass the torch. The first thing I did was go out for a ski. I was so happy. I was laughing and crying at the same time while I was skiing. I was doing a bunch of wicked intervals. Doing Klaebo technique up the steep uphills. I was so amped!”

“I just feel so much lighter,” he went on, “because I know that these two women are going to do better than I did at promoting the sport.”

And Bill Koch, the private man, the quiet man, the man who’s always tried to do everything he could for the sport while thinking it wasn’t, perhaps, enough, has been set free.

“The new era has been dawning for a number of years now,” he added. “But, now, the sun just rose.”