American women’s cross country head coach Matt Whitcomb is anything but understated in his opposition to the casual penalties handed down to Russian athletes, suspended from the PyeongChang Olympics after being found guilty of doping at the Sochi Games. You could say he’s got a “you’re either with us or against us” attitude toward keeping the sport clean.

In the men’s classic sprint quarter-final, he was in the coaches section when American Simi Hamilton was involved in a crash with several others—including Olympic Athlete from Russia, Alexey Vitsenko, who’d had an equipment failure. We caught up with Matt after the women’s 4x5km relay to have him share the story and a little of what he thinks of Anglo/Russian relations on the course: 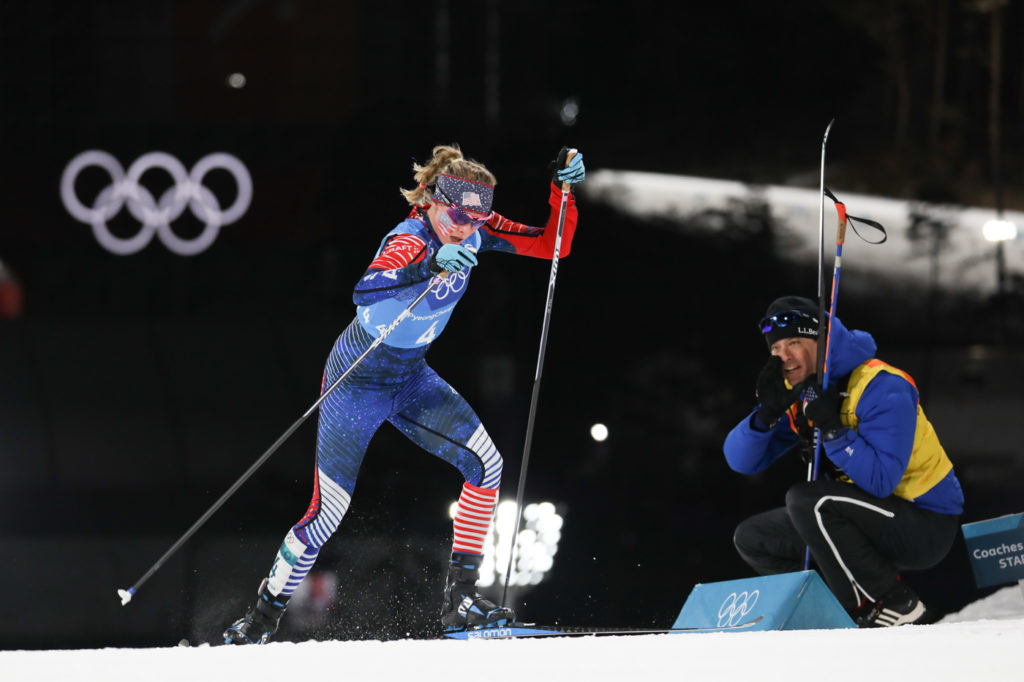 Cross Country Skier (XCS): Tell us what happened in the classic sprint:

Matt Whitcomb (MW): Simi got into a crash with a couple other people and I happened to be there in the coaching zone. So, right away I ran down just because I assumed there would be some broken equipment. Which there was none of. And as I was cheering Simi to get going back up the hill I noticed a ski zipping backwards down the track. Simi stepped over, and I snagged it out of the track with my hand and I ran it up to the Russian.

XCS: So, he just blew a shoe or broke a binding or…?

MW: The binding opened up and his ski popped off probably resulting from the crash. I mean, you never know what’s going to happen later in the race. Unfortunately for him, it was a little bit too much time, but it allowed him to finish with dignity and you never want to be unable to finish these races, regardless of what place you’re in.

XCS: Talk to us a little bit about clean sport and some of your comments about the situation with Russia and how that has played out.

MW: Yeah, it’s been a really unfortunate finding, what occurred in Sochi. I want to make it clear; it’s not me, or the Americans, against Russia. It’s me against dopers. And, so even if you’re on my own team and I find out that you’re involved in foul play I’m going to be against you as well. So, it has nothing to do with what nation you’re from. I just really strongly believe, all the way back from my upbringing, that fair play is really important, whether it’s cutting corners or taking EPO, it’s important that we clean the sport up. And I think if you make some progress with those that are violating the anti-doping code it’s not going to take much to have a very clean sport. But it also would not take much to completely destroy the sport.

You know, the first people that I congratulated today were actually the four Russian women. There’s no animosity between the nations. As much as people might love that story it just doesn’t exist. The Russian coach gave me a big hug tonight. We always congratulate each other when our athletes do well or say we’re sorry when they don’t. It’s a very harmonious environment—between coaches and coaches, and coaches and athletes, and athletes and athletes.

XCS: Talk about that Russian relay team. We didn’t know a lot about them coming in. Obviously, they’ve answered a lot of questions.

MW: We knew they were going to be a team that nobody was paying attention to. But, really this entire year [they’ve had success], take Yulia Belorukova, she was on the podium in the sprint in Finland the very first race of the year. And if you watch the results, all four of them had been slowly, and in some cases very quickly, climbing up the results of both sprinting and distance. So, we didn’t know exactly how it was going to materialize. The strategy that they used was to put out two classic skiers very aggressively, and that turned out to be detrimental for us. We needed a slightly mellower pace out of the start. But that’s not what happened. They were very smart in their strategy and I’m really happy for them. It makes me proud to think that they’re hitting these podiums clean. So, I’m happy for them.

Stay tuned to our online coverage as we speak with more athletes and coaches, like Matt, throughout the Games.